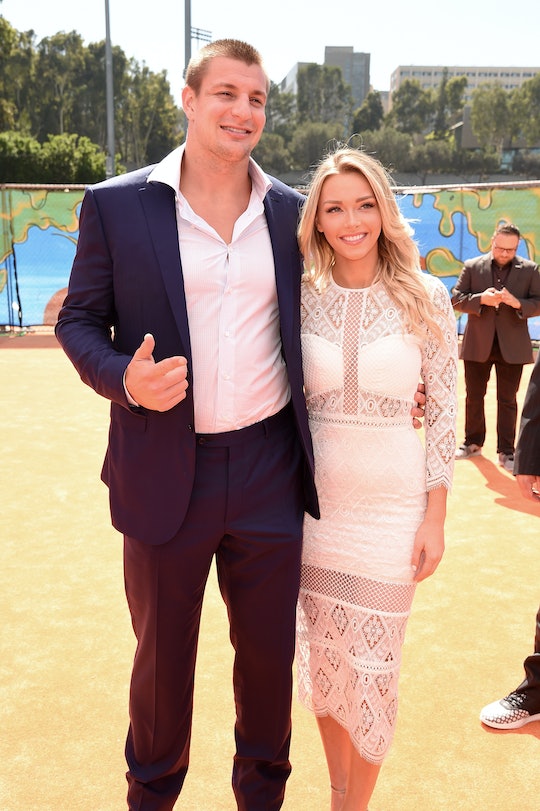 Tom Brady isn’t the only star on the New England Patriots. When the team takes the field for Super Bowl LIII, many eyes will be on tight end Rob Gronkowski, who makes so many of those successful plays the team is known for. Is Rob Gronkowski married? The standout player has a longtime girlfriend, but hasn’t walked down the aisle yet.

Gronkowski’s main squeeze is model and former Patriots cheerleader Camille Kostek, according to Fox News, which reported that the two began dating in 2015. Kostek was careful to note that they began dating after she resigned from the team. “We first got in touch once I resigned from the team. I always knew who he was before I was even a cheerleader. I knew who he was on the roster. I just never paid any mind. Once I resigned is when we finally met,” she told the news outlet.

Their romance was kept under wraps at first, according to E! News, but eventually word leaked out and Kostek had to start dealing with her newfound place in the spotlight next to one of the NFL’s biggest stars. “I am such a private person,” she told Fox News. “It was hard at first when people would send articles with my name on it. It’s an overwhelming thing to read something that you have no control over.”

In September 2015, she confirmed the relationship with a cute snap on her Instagram.

Gronkowski later urged Kostek to ignore all the noise and just keep being herself with encouragement on Twitter:

That post came in early 2017, when there were rumors of a breakup as public sightings of the couple stopped, according to E! News. But a date to a wedding in May 2017 confirmed the relationship was still going strong, according to the Daily Mail.

Since then, the couple seem to have settled into a groove and Kostek is definitely keeping the future in mind. “I like to think of my life as very spontaneous and new all the time," she told The Improper Bostonian in October 2018. "So whenever a proposal comes into my life, I think that I’ll be very surprised, but right now, Rob and I are totally career-focused. We’re not just a fling. We definitely see a future with each other. But as of right now, there are no plans.”

That makes sense since both their careers are hot right now. Gronkowski is of one of the top players on the team many consider to be the top in the league and Kostek has made a splash as a Sports Illustrated swimsuit model. In 2017, she was selected as one of 35 finalists after submitting her Instagram photos to an open casting call.

In her submission, according to Sports Illustrated, she said that she’s would be thrilled to be part of an organization that celebrates women of all shapes and sizes: “They have this movement where you can just be beautiful no matter what shape, what size, your height, your body type, your ethnicity,…They represent it all. And I want to be a part of that.”

Right now she’s also probably pretty happy to be part of Gronkowski’s personal cheering section from the stands of the Super Bowl. Keep an eye out for both of them when the big game airs on Sunday, Feb. 3.