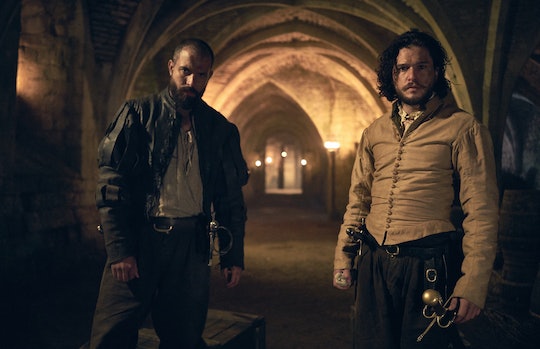 In Gunpowder, Kit Harington plays a Catholic revolutionary named Robert Catesby who will go to any length to end Catholic persecution in England — even if it means taking out the king himself. He concocts a plan to plant explosives beneath the Houses of Parliament and blow up everyone inside, aided by a handful of collaborators. But is Robert Catesby in Gunpowder based on a real person? Despite how outlandish the story might sound on paper, everything in the miniseries is (mostly) true, from its protagonist to the events he sets in motion.

Catesby did indeed hatch a plan to assassinate the king, though he was not successful. The scheme was discovered thanks to an anonymous letter and all of the men involved were killed in one way or another, with varying levels of violence. Involved alongside Catesby were 12 other men whose names might not be terribly familiar to people today outside of Guy Fawkes, a soldier enlisted later on who went on to spawn his own holiday and lend his image to the film V for Vendetta.

It seems that Gunpowder endeavored to remain faithful to history, and that included its depiction of Catesby as a man willing to engage in some serious violence if it meant getting what he wanted in the end.

There is also a more personal connection between the historical Catesby and the actor portraying him. Harington, who was a producer on the series as well as the star, is a direct descendant of his character on his mother's side. In fact, his full name is actually Christopher Catesby Harington; Kit is a nickname. But the links don't stop there, because on his father's side Harington is descended from the men Catesby was trying to kill.

"Lord Harington was in the Houses of Parliament at the time that Catesby was trying to blow it up," Harington told BBC Newsbeat. "As Catesby's head was marched past on a pike, Harington is quoted as saying, 'He's an ugly fellow, isn't he?' and I thought that is brilliant that my dad's side was slagging off mum's side way back in 1605. I wanted to get that line in but it never made it."

Catesby masterminded what became known as the Gunpowder Plot, but in addition to being foiled, his machinations led to his death. He didn't have to undergo the torture his co-conspirators did (which apparently caused Fawkes to commit suicide by jumping to his death rather than be painfully executed by being hung, drawn, and quartered). At the time the plot was unraveling, Catesby had gone into the Midlands along with several of his men to prepare for the expected uprising the explosion would cause. Obviously, it didn't quite happen as he thought it would.

Instead, Fawkes was arrested back in London. The other men embroiled in the plan were soon revealed and sought after, though Catesby intended to stand until the last possible moment. He retreated to Holbeche House in Staffordshire to avoid capture, but he didn't last long once the king's men arrived. Catesby was shot and killed, then apparently discovered clutching a picture of the Virgin Mary so he could remain on brand until the very end. His head was severed and later displayed, as mentioned by Harington.

Harington explained to the Belfast Telegraph that while he was always aware of the family connection, working on Gunpowder vastly increased his knowledge of his ancestor — and changed his opinion of the man. "Before I got into this, I guess in some ways I might have been proud of him. But if you look at who he is... He's a widower, he doesn't connect with his son, he is experiencing huge persecution and his money has been stripped from him," Harington said, adding:

I think in some ways he's on some kind of death wish and he draws some innocent people in with him into this plot. So I don't have particularly fond feelings towards him. The major change was that I felt desperately sorry for him after doing this. As you'll see, he's a deeply sad man who botched his one big thing.

If you're curious to learn the real story behind the Guy Fawkes mask, then it seems like tuning into Gunpowder on HBO on Monday, Dec. 18 might be a good place to start.