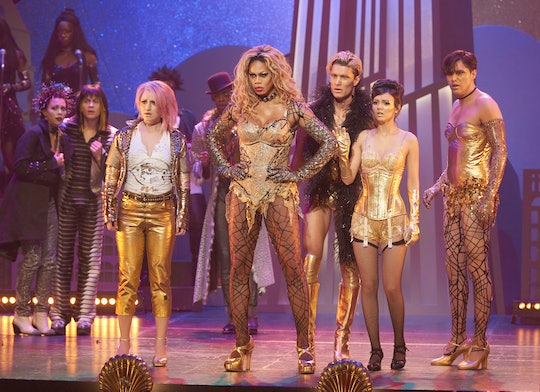 Is 'Rocky Horror' On Fox Lip Sync? It's Not A Live Broadcast

FOX's version of Rocky Horror joins other classic musicals that have been remade on television in recent years, such as The Sound of Music and Grease. The difference between the others and Rocky Horror, though, is that it's not live. While the remake features prominent singers and performers, it being taped makes fans wonder: is Rocky Horror lip sync?

According to Mashable, FOX's Rocky Horror special does feature lip syncing. "Kenny [Ortega] didn’t want to do it; he said we weren’t gonna do it if they wanted us to do it live," Executive producer Lou Adler told Mashable about director Kenny Ortega. "He wanted to make a film, he wanted to be able to go down and come up and show all of it — he’s a choreographer, so he wanted to film it in that way," he continued.

For some, the tape recording – and especially the lip syncing – made the special lose its charm. Indiewire's TV critic Liz Shannon Miller did not have a favorable review of the remake. She admired the fact that the remake took a different perspective of the musical; for example, Laverne Cox's version of "Sweet Transvestite" was her own, not a copy of Tim Curry's.

The lip syncing, however, was one of the reasons she was underwhelmed. "The lip-syncing is a massive issue — not many of the cast have a real knack for it," Miller wrote, "but beyond that it would go a long way toward differentiating the Fox version from the original, which features its own occasionally awkward sync issues."

Miller was definitely not the only one who thought the lip syncing was apparent. Some viewers took to Twitter to voice their opinions:

Some were mislead into thinking the performance would be live, as other musical remakes on major networks have been. Not only were some disappointed in the show being taped, but they thought that the lip syncing was more obvious than it should have been. Perhaps the next time FOX or another network takes on a cult musical, they'll either follow public opinion and produce it live – or use another tactic as to not lip sync when taping. Regardless, it's too late for Rocky Horror, but if we ignore some trip-ups in the lip syncing we can enjoy the remake and, indeed, do the Time Warp again.