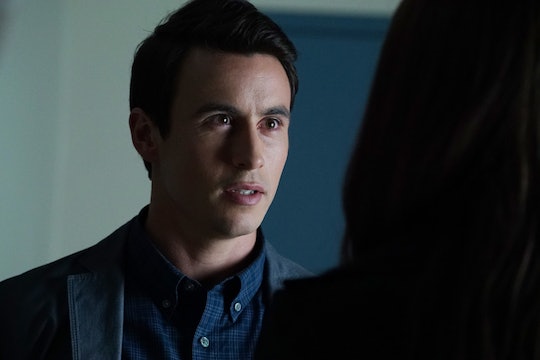 Is Rollins Really Dead On 'Pretty Little Liars'? His Grave May Be Empty

In Rosewood, people die and come back all the time; it's kind of the town's thing. Therefore it shouldn't be all that surprising that Dr. Rollins, aka Archer Dunhill, may not be as dead as the Liars thought he was. Seriously, did any of the girls even bother to even check his pulse before they buried him? If Mona was there she definitely would have. Regardless, the real question now is is Rollins really dead on Pretty Little Liars or is he still walking around disguised as Detective Wilden (who's definitely dead)?

According to Detective Marco, the hot guy that Spencer almost slept with, Archer was last "seen" in Baltimore, Maryland. After shocking Ali he explained that's the last place a credit card that belonged to Dr. Rollins was used and that they believe to be tracking someone that may be him. They have the person's license plate and have cops from Rosewood all the way to Denver keeping a lookout for the suspect. Unfortunately for the Liars, Detective Marco is determined to find Archer and bring him to justice for what he did to Ali. Thankfully, the police and detectives in Rosewood have never been good at their jobs so the Liars probably don't have anything to worry about.

Except for the fact that they may have buried someone alive. Wait, doesn't this plot sound familiar? Oh right, that's what happened to Ali. What an interesting coincidence. Similarities between potential murders aside, in the preview for Tuesday night's episode it looks like Archer, or at least someone that sounds like Archer (Wren is that you?), gives Hanna a call telling her, "The next time you bury someone, make sure they're dead." Yikes!

Spencer, being as pragmatic as always, then says that the only way to make sure he's actually dead is to dig up the grave and see if his body is still there. So back into the forest the Liars go and my guess is that grave will be totally empty but that doesn't necessarily mean Archer's still alive. It's more likely the real A.D. took the body, probably to blackmail the Liars, and now that'll be hanging over the heads for the rest of the season.

However, if Archer's still alive the Liars will be in even more trouble than they already are and they'll have to do some serious damage control if they want to escape jail time. Good luck, Liars!