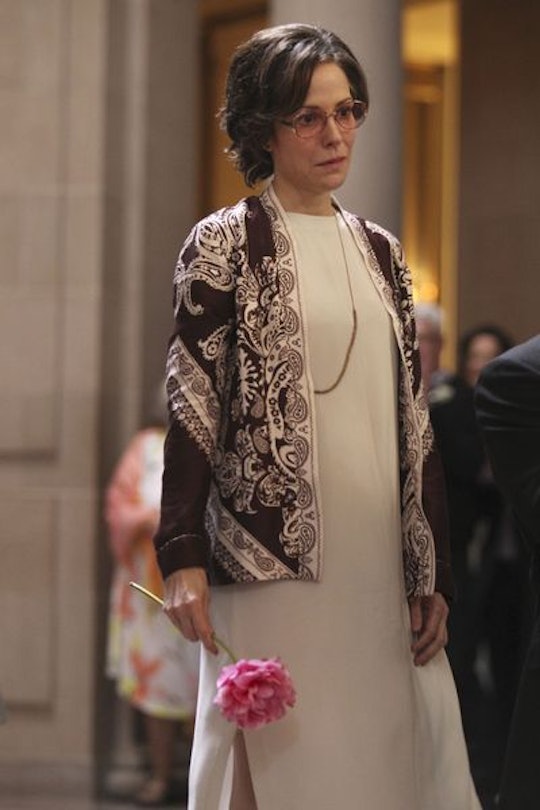 Mary-Louise Parker Is Roma Guy In 'When We Rise'

ABC's eight-hour special When We Rise will air across four nights, following a brief interruption by President Trump's first State of the Union address. The epic miniseries tackles five decades in the fight for LGBTQ+ rights, and frames the story through the eyes of its three main characters, Cleve Jones, Roma Guy, and Ken Jones. Young Roma is played by Fun Home's Emily Skeggs in the series' 1970s-1980s sequences and by Mary-Louise Parker in its later installments. But viewers may be wondering: is Roma Guy a real person on When We Rise? In fact, all three of the main characters are based on real people.

Cleve Jones really worked on Harvey Milk's campaign (later witnessing his assassination), Ken Jones is a real Vietnam War veteran who went on to work with homeless queer youth populations in San Francisco, and Roma Guy is a real lesbian feminist activist who came up alongside Cleve. She co-founded The San Francisco Women's Building, which is a women-led arts and education community center and non-profit organization. She also works as a criminal justice and public health activist in San Francisco, where she serves as a professor in the Department of Health Education at San Francisco State University. It was her work with homeless populations that helped frame housing as a public health issue, and in 2005, she was nominated for a Nobel Peace Prize.

In When We Rise, Guy is depicted as a young activist with the women's movement who comes to terms with her own sexuality as she's fighting for the rights of her lesbian friends. Later, her character is used along with Cleve's to depict the ways in which gay women and men worked together during the AIDS crisis. As Variety put it in a review of the miniseries: "In a sad but beautiful karmic loop, the men who showed up for women’s rights end up dying in AIDS wards nursed by the women they fought for."

Guy's partner Diane, also depicted in the series, really did work as one of the first HIV/AIDS nurses in San Francisco during the early stages of the AIDS crisis. She's also a fellow social justice activist and a co-founder of The Women's Building. True Blood alum Fiona Dourif plays Diane in her younger years, while Rachel Griffiths tackles the role for Diane's older years. Although Roma and Diane are prominent figures from the front lines of the LGBTQ+ rights movement, this is the first time their story is being told on such a mainstream platform.