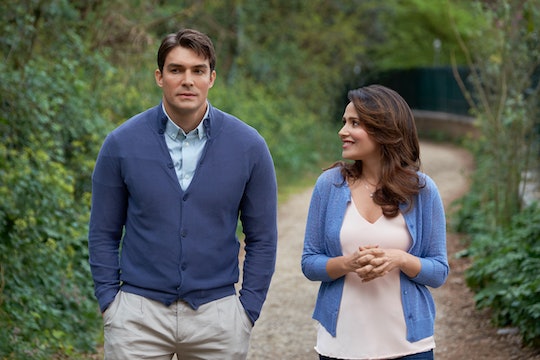 This weekend, The Hallmark Channel officially kicks off its Summer Nights lineup with Rome in Love. Premiering on Saturday, July 27, the film introduces the limited edition lineup with a trip around the globe. A lot of fans are left wondering if Rome in Love is based on a true story, or if it's all a work of fiction. The film may have some true aspects, but that may be all there is to it.

In case this becomes a trivia night question, Rome in Love isn't based on any one true event, person, or story. That said, it was adapted from a book of the same name by author, Anita Hughes. The bestselling author has written over a dozen adult fiction books and wanderlust love appears to be a common theme (I'm not mad about it). The places Hughes has written about include Rome (obviously), but also France, London, California, Paris, and a slew of beachy locales.

According to Hallmark's synopsis, Rome in Love (the film) follows Amelia (Italia Ricci) as she gets the role of a lifetime in a remake of the Audrey Hepburn movie, Roman Holiday. She's flown off to Rome to prepare, devoting time to journalist, Philip (Peter Porte), who's writing an article to introduce the former "no-name" actress to the world in an Italian magazine. Reluctantly, Amelia agrees to accompany Philip sightseeing all the major Italian landmarks, and the two become friends... or more. If it all sounds a little too magical, don't worry; it's about to take a turn.

Philip's editor expects a tell-all, but he promises Amelia she can have a glimpse before the article goes live. And of course, the more time the two spend together, the more they fall in love, complicated by the fact that Amelia will return to the states after filming — just like the characters in the movie she stars in. It wouldn't be classic rom-com without secrets, some form of mystery, and intrigue. Naturally, Philip has secrets that may come between the new pair before there's ever a chance for love. As for mystery and intrigue, isn't vicariously traveling to Rome enough? If you've read the book, or any of Hughes's work, you already know where this wanderlust story is headed. If you haven't, strap in and enjoy the ride.

It makes sense that fans might think Rome in Love is based on a true story. The writers, Hughes, Judd Parkin, and Topher Payne, are a talented crew, but Rome in Love is still only fiction. The synopsis for the book is similar, sticking to the main plot points, so if you're a major Hughes fan, you might enjoy comparing the two versions. That said, if you're looking for a more detailed description about the film, the book's copy may give it away, so avoid that if you'd rather watch without spoilers of any kind. Though this project isn't grounded in anything true, I can definitely see how both the book and the movie could inspire their own true-to-life love stories. Maybe Hallmark can circle back around to pick those headlines up and create a "true story based on fiction." Is there even such a thing? There should be.

Rome in Love isn't based on a true story, but it is adapted from a bestselling book. As the first film in the Summer Nights lineup, there is a lot of pressure to set the right tone. Based on the synopsis alone, I'm sure Rome in Love will do as expected. It might even inspire you to book a trip somewhere magical. I suggest Rome.