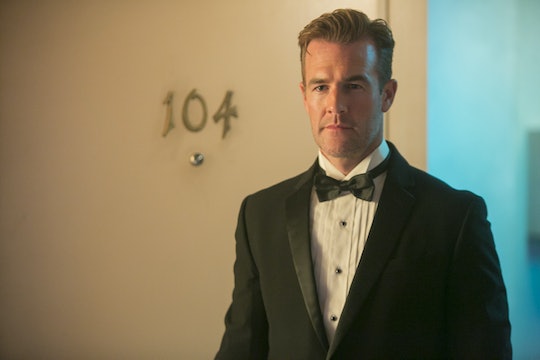 'Room 104' Will Absolutely Terrify You

Mark and Jay Duplass are well known for establishing the mumblecore genre with The Puffy Chair, Jeff Who Lives at Home, and Togetherness, but their next creative venture has a lot more scare factor. The Duplass Bros are re-teaming with HBO for Room 104, the horror anthology series that they created, produced, and wrote many of the episodes for based around a single hotel room, the various occupants who pass through it, and the terror they find there. The brothers have drawn from personal experience and real life in their work before, so is Room 104 based on true events? The answer is... sort of.

In an interview with Newsweek, the Duplass brothers said they've had the idea for Room 104 for 10 years. They were interested in a familiar space, cue the "epically boring" hotel room, and slightly extraordinarily events, cue the horror plot. Mark said, "Could anything interesting possibly happen inside those walls? That's kind of the impetus of the whole show."

Before Ryan Murphy changed the horror anthology game with American Horror Story, there were shows like Alfred Hitchcock Presents that took advantage of the format in the '70s. With Room 104, the Duplass brothers say, their intention is to call back to that era.

While Mark noted their reputation for a “signature brand of realist-dramatic-awkward comedy,” the creative team of 12 years said that Room 104 provided them with the opportunity to say, “Screw all that, to get strange, take the shackles off.” (I hope that means the show is extra unhinged, because as any longtime Duplass fan knows, that's when the brothers are at their best.)

So why did it take the brothers 10 years to create what they call their "dream show"? "We didn’t have the credibility to do it,” said Mark. He went on to say that they were able to learn from their experience working on Togetherness, which was canceled after its second season. “Speaking candidly, they overpaid us, and it was too expensive to keep on the air. That was a really good lesson: How do you make a show that is valuable to the network, no matter what? Room 104 is a great example—it’s cheap, it’s fast, it’s electric. If you keep it small and controlled, they can’t really stop you.”

The show, in all honesty, sounds like a blast. It plays with genres (one episode is told entirely in the style of modern dance, while others are psychological thrillers and nostalgic romps), features well known TV actors in the form of Mae Whitman, James Van Der Beek, and Jay Duplass himself, and in the event people like it, the brothers say there is tons of potential for future installments.