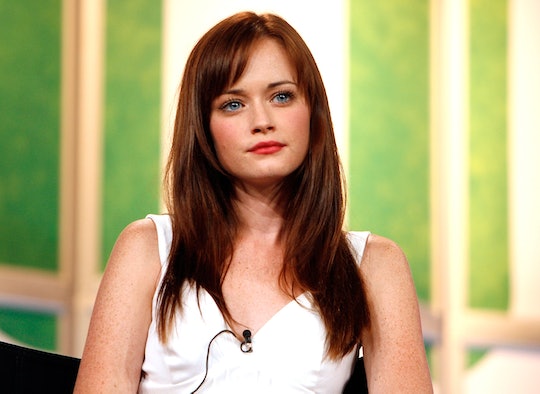 Is Rory Back With Jess During The 'Gilmore Girls' Netflix Reboot? They Could Be Getting A Happily Ever After

Whenever a network remakes a show, it's always hard to accept whatever changes come with the new scripts. And there are so many questions (and expectations) surrounding everyone's favorite nineties show about mother-daughter friendship. But the biggest question of all, really, is if Rory and Jess are together for the Gilmore Girls Netflix reboot. On Wednesday, actor Milo Ventimiglia tweeted a picture of his script, officially confirming that he's totally back in town.

This is very good news. He was always the perfect bad boy antidote to Rory's cardiganed self. And Jess and Rory are just as much soulmates as Lorelei and Luke. Then again, not ending up with their soulmates might run in both families. The last time viewers got to see Jess was in season six when he and Rory hooked up in Philadelphia. But she admitted that she was sort of using him to make Logan jealous. Even though he was hurt, Jess gave Rory permission to use him as a pawn in her failing relationship. Because he love-love-loved her. After that, we lost track of Jess for the rest of the series, but now that he's confirmed in the Netflix reboot, we can only cross our fingers for some rekindled romance between him and Rory.

It's sort of too delicious to be true. But maybe that means it is too good to be true. The reboot is just four "mini movies" according to Netflix and they take place in the present day. So that's about eight years after we left everyone. Anything could have happened in that time. Rory had turned down Logan's marriage proposal and totally immersed in her Yale life at the end of the series, after all. Of course, she didn't exactly going running to Jess and she never gave any sign of thinking about him. What if she's married? What if Jess is? What if he has a kid? A dog? (Oh, please, let him have a dog.)

No matter where they find themselves, sparks will definitely fly when they meet in Stars Hollow as grownups. Sure, a lot can happen in almost a decade, but this is television, and Team Jess needs this. Fans have been reacting on Twitter ever since his tweet, breathing sighs of "finally!" Because seriously, if we can't have Sookie, we need something else to whet our appetites for vintage Stars Hollow.

Since Gilmore Girls, Ventimiglia has starred in a bunch of films and TV series, most notably Heroes, some episodes of Gotham, and he's going to be in a new USA Network show called Relationship Status premiering in 2016. But what does that matter? Jess is back. Let's just hope Rory's come to her senses and he'll still have her.