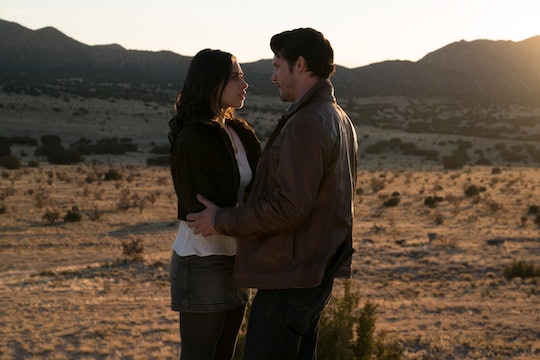 'Roswell, New Mexico' Is A Town With A Seriously Creepy History

The aliens have landed in Roswell, New Mexico, and it looks like they’ve been in hiding in plain sight for years. The new CW series is centered in the town of Roswell where Liz Ortecho reconnects with her teenage crush, Max Evans, and eventually discovers that he’s an alien from another world. The town has been the subject of countless movies and shows for years, but is Roswell a real place?

The answer is yes. Roswell is a small city in New Mexico located approximately 200 miles southeast of Albuquerque. With a population of nearly 50,000, it is the fifth-largest city in the state, and is home to many large farming, distribution, and manufacturing businesses. According to the town’s website, when Roswell was first settled in 1865 it was called the Missouri Plaza. But in 1869, when Omaha businessman Van C. Smith built the town’s first two buildings, he renamed it after his father, Roswell Smith.

In the 1930s, scientist Robert H. Goddard conducted a series of rocket experiments in Roswell — a project led and funded by aviator Charles Lindbergh and businessman Harry Guggenheim. For 12 years, Goddard worked on secret rocket experiments and launches that contributed to the United States’ success in the moon race and early space exploration.

But it wasn’t until the alleged UFO incident of 1947 that Roswell became synonymous with all things alien. According to the Smithsonian, by the 1940s, Roswell was home to the now decommissioned Walker Air Force Base and numerous top-secret military exercises. On the heels of World War II, the US government conducted a secret operation, called Project Mogul, in an around the city of Roswell. The project involved putting microphones on high-altitude balloons to detect sound waves from Russian nuclear bomb tests. One of those balloons crashed landed in Roswell in 1947, reported the Smithsonian, resulting in rumors and headlines that suggested it was an alien spaceship.

Roger Launius, a former curator of space history at the Smithsonian’s National Air and Space Museum, told the outlet that the US government didn’t deny the rumors and reports of an alien ship because they wanted to keep Project Mogul secret. “Apparently, it was better from the Air Force’s perspective that there was a crashed ‘alien’ spacecraft out there than to tell the truth,” said Launius. “A flying saucer was easier to admit than Project Mogul.”

The 1947 crash put Roswell on the map as a city with extraterrestrial secrets, and it has remained that way ever since. The Pentagon declassified details of Project Mogul and its balloon in 1994, but many people still believe that an alien ship crashed in Roswell and that the government continues to cover it up. That being said, Roswell is now home to plenty of UFO-inspired tours, events, and museums, including a tour of the 1947 crash site, which was recently opened to the public after 70 years.

Whether you believe in aliens or not, you have to admit that Roswell’s history is intriguing and unique. It’s no wonder the town has been the subject of so much alien lore, and luckily, you’ll get to see plenty more of it in CW's new series.