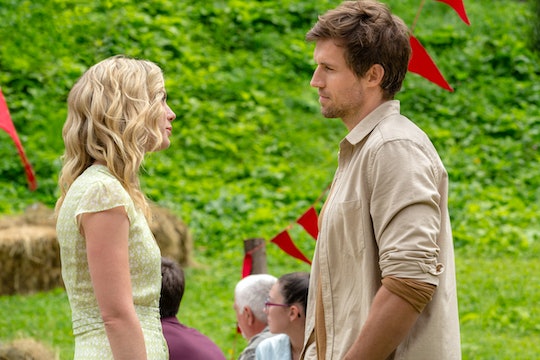 It might feel like winter is never going to end, which is why we're so lucky to have Hallmark movies. The latest is Royal Hearts, which is like the Netflix's original movie A Christmas Prince, but even better. It's such a good story that it had me wondering: Is Royal Hearts based on a true story?

The movie is about Kelly, a "hopeless romantic" who lives in Montana on her father Hank's ranch. One day, they get news that he's inherited an estate in a "faraway land" called Merania. So they head over there and find out that not only are they the landowners, Hank is also now the king, which makes her a princess. Of course, there's an evil prince and a sweet, humble sheep herder. You be the judge about who she ends up falling for. (Hint: It's not the terrible prince, though he is rather dashing.)

Sadly, all of this is way too good to be true, especially since Merania isn't even a real place (They filmed in Romania.) It was a fiefdom of the Roman Empire from 1152 until 1248, so technically an estate could still exist, but there's no actual boundary, let alone a working monarchy. Still, it would be lovely if it was, right?

Even though it's not a true story, it's still a perfect movie to curl up and watch on a cold Saturday night. Despite the hunky love interests, there's another really great reason to obsess over the movie. Hank is played by the legendary James Brolin, who also directed it. He told Access Hollywood that it was the "best Hallmark movie ever made," and to be honest, I'm right there with him.

The 77-year-old Emmy and Golden Globe winner didn't start directing until later in his career. After starring in Hallmark's highest rated movie ever Christmas with Tucker, the network couldn't wait for him to do another one. Brolin agreed on one condition — that he would get to direct. So really, this whole movie would be totally different if it weren't for him. Directing is sort of a deal breaker for him these days.

He told Telegram.com, "The deal was I would do it if I could direct. I have been directing for over 30 years. The next thing I knew, we were on and the film (I’ll Be Home for Christmas) became the top film for them that year.” Now, he's a "shoo-in" with the network.

I wish I had started directing when I was in my 20s. I wish I had been like my shy friend, Steven Spielberg, years ago when he walked into the studio with only a short stop animation film and six months later had an office.

If you love the little details about Hank hating his royal duties and just wanting to get back to the simple life in Montana and the relationship between a father and daughter at that stage of life, you have Brolin to thank for making it so realistic.

"They were not interested in how the father and daughter weren’t relating that well at this point in her life. They also didn’t like how Hank wanted to get back to the lifestyle he loved," Brolin explained during the same interview, while adding:

All the notes they had about the script were about taking out those scenes. That was a fight I had all the way through the filming. They wanted me to give in and I said this guy never gives in. He will stay around and help but as soon as the job is done, he will be out of there.

So although Merania isn't real and the love story is all made up, the little things are just right. And that's all thanks to Brolin, so be sure to tune in for Royal Hearts on Saturday, Feb. 24 at 9 p.m. EST on Hallmark.