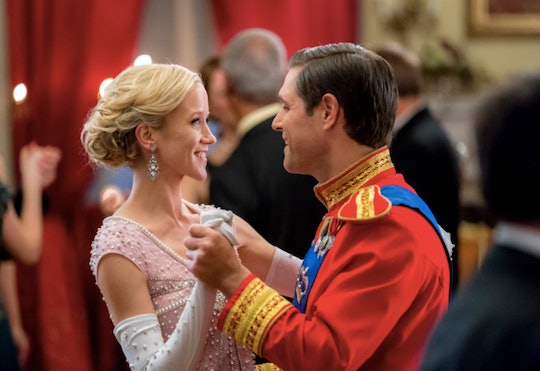 Just because Christmas has come and gone doesn't mean that Hallmark has stopped pumping out the ever cheesy yet addictive holiday movies, which is good news if you're still hibernating over this holiday break. If you don't have any plans yet for New Year's Eve, you can always queue up Hallmark's Royal New Year's Eve and pretend it's a true story based on your ever exciting, super romantic life. Hey, a gal can dream, right?

The premise of the movie isn't totally impossible, though it's pretty outlandish, as all good Hallmark movies are. The movie is about Caitlyn, played by Jessy Schram, an aspiring fashion designer, who's hired by Lady Isabelle, the girlfriend of Prince Jeffrey (played by Sam Page) to design her New Year's Eve ball gown. Prince Jeffrey's supposed to propose at this party, which means that it could be a huge deal for Caitlyn's career. As she plans the ball and designs the dress, she and Jeffrey end up falling for each other, of course. So it's now up to the prince to buck tradition and marry the budding fashion star or follow through on the original plan. I won't spoil it for you, but you could probably bet on how it ends.

Although it seems unlikely that she never saw the prince before bumping into him on her way to work or that a fashion magazine assistant would be chosen to design a royal engagement gown, there's no reason you can't wish it was based on a true story. When it comes to holiday movies, let's all just leave reality alone.

Page, who you probably recognize from Gossip Girl, Mad Men, or The Bold Type, feels like the Royal New Year's Eve story could totally happen. And to be honest, the plot line is arguably more realistic than anything from Gossip Girl sometimes. He said in a cast interview with Hallmark, "What fans will really love about this movie is that as much as it is a fairytale romance it does feel real. There's nothing too out of the ordinary that this story couldn't happen."

What makes it realistic to him is how the characters interact with each other. Page added that it's not just a "flight of fancy" when the prince and Caitlyn fall for each other. "It's something to be explored," he said, and he likes that it's not like the prince just dumps Isabelle and then gets down on on knee for his new romance. He added:

I think that's what makes it real. It's not just jumping around or people throwing around their feelings and people being very careful with other people's feelings.

He's not totally wrong — if the right circumstances aligned, this fairytale romance is semi-plausible. Just think: Meghan Markle isn't nobility and she's going to marry Prince Harry after being set up with him. Likewise, Kate Middleton and Prince William met at the University of St Andrews and are living happily ever after. So it's not totally out there that a "regular" woman could fall in love with a royal prince.

Schram just thinks people should soak up the fairytale without worrying too much if it feels real. "I love fairy tales, I find them beautiful and I love the suspense and I love smiling and crying at all the right moments." Schram added in her own cast interview. "I think it's fun, so much nowadays is about playing so many serious moments and though it is serious in here, it's really fun to get to play the twinkle out of someone else's eyes and the one in yours."

Obviously, the rest of us love all the twinkle, too.