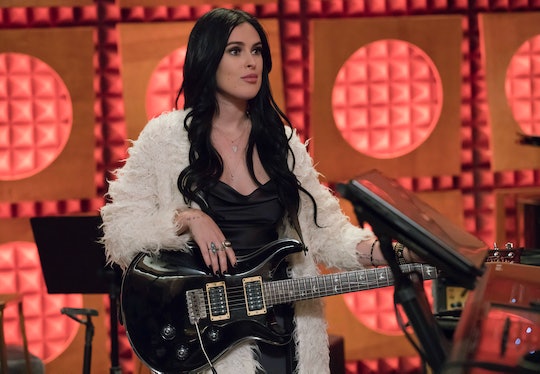 Rumer Willis joined the cast of Empire this season as Jamal Lyon's rehab buddy Tory Ash, a washed up singer-songwriter whose smoky look, bluesy vocals, and troubled storyline heavily parallel that of a real life artist's struggle with addiction: Amy Winehouse. Tory and Jamal wrote a duet together while in rehab and performed the collaboration on the show, which may have prompted some fans to wonder: is Rumer Willis really singing on Empire?

It's pretty clear that Tory is modeled after Winehouse, and, given the arc of her character, it seems like she may not get a happier ending. Jussie Smollett teased during a panel for the spring premiere that she potentially drags Jamal back into substance abuse, saying, "She’s definitely not going to be a positive influence on him. We really dabble with the idea, 'is he really ready to be done [with drugs]?'"

As for her casting, the decision to go with Rumer Willis was actually a direct result of her singing voice. She's a longtime cabaret performer and she played Roxie Hart in Chicago on Broadway back in 2015. While dancing isn't quite as essential to her role on Empire, it is worth noting Willis' true triple threat status: she also won the Mirrorball trophy on Season 20 of Dancing With the Stars.

Smollett is actually the one who discovered his costar in an Instagram video of her singing an Amy Winehouse song. She also performed Winehouse's "You Know I’m No Good" on the radio show Sway in the Morning, so Willis has plenty of experience with the artist's vocal stylings. She seems like a natural choice to play a character who feels modeled after Winehouse. Empire hasn't wasted any of her talents, giving Tory two duets with Jamal so far, both of which are available on iTunes. First, they wrote the mournful "Simple Song" together in rehab, but had to sneak out to record the track because their facility had a strict no music policy? (It's the Footloose of rehabs, apparently.) After that, they laid down the more upbeat "Feel So Good" in Empire's studios with a full brass band. And, as the iTunes artist list shows, it really is Rumer Willis singing along with Jussie Smollett.

Because Empire is such a music-centric show with such A-list guest appearances, it's hard to believe they would ever feature an actor who wasn't singing for real. The bench of highly talented actor-singers is just too deep to go to waste.