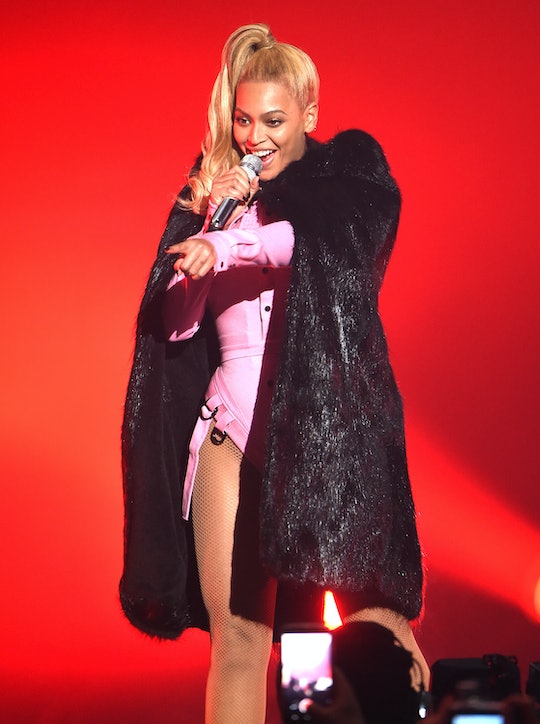 It finally happened. After almost two months of Instagram silence, Beyoncé finally shared the first photo of her twins, Rumi and Sir Carter. The photo is as grand and as fabulous as fans have come to expect from Beyoncé, setting the bar high for every other photo to come. Along with the new picture, Beyoncé captioned the adorable pic, "Sir Carter and Rumi 1 month today," with emojis that make up the Knowles-Carter family. Many fans took to Instagram to congratulate Yoncé for the beautiful additions to her family, while others are still talking about whether or not Rumi is a boy's name.

In 2017, unisex, or gender-ambiguous, names are popping up all over the place, and it is time people just accept it. In 2016, the New York Times wrote about the "rise" of "post-gender" names, which it defined as "a name given to both boys and girls in roughly equal measure." With parents using names like James or Lincoln for baby girls (like Ryan Reynolds and Blake Lively, and Kristen Bell and Dax Shepard, respectively), it is not uncommon for names to blur the gender line. And there is nothing wrong with that.

While Nameberry.com does state that Rumi has been, in the past, linked to being a female name, it wouldn't matter if was previously seen as a male name. Rumi is a name that Beyoncé and JAY-Z have chosen for their daughter, and that's it. That's all there is to it. We just get to admire the beautifully presented photo below. How lucky are we?

As previously reported by TODAY, the name Rumi (as well as Sir Carter) has been linked to a Persian poet, who popularly went by the same name. In his own work, the name Sir would appear, which TODAY reports may suggest the origin of Sir Carter's name. While Beyoncé has yet to confirm this herself, it could be a truly beautiful tribute to the popular poet.

With that said, regardless of Rumi's origin, Beyoncé and JAY-Z are allowed to name their children whatever they so please, and fans should respect that. No matter what the history behind a name may be, it is no surprise that Beyoncé is making her own history by choosing it. What else would you expect from a Queen?