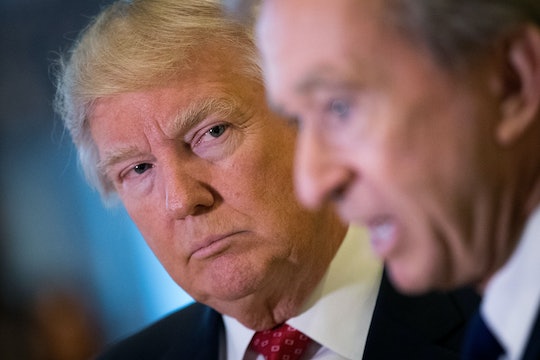 Russia May Have Damaging Info On Trump

Remember the good old days when we were all upset that Donald Trump hadn't released his tax returns? Ah, simplicity. Well, since then, Trump has unleashed P--ygate, been accused of numerous sexual assault accusations (all of which he has vehemently denied), and possible nepotism. However, all of that (sort of) pales in comparison to the latest news that Russia may have been (and still is) withholding damaging information relating to Trump's businesses and finances — in layman's terms, Russia could be blackmailing our president-elect, if the intelligence community's latest report is to be believed (and it should be).

So, what exactly is happening? Well, heads of intelligence agencies (including James Comey) presented a briefing to President Obama and President-elect Trump in regards to the claims of Russian interference with the 2016 election. On top of this information, Comey, along with Clapper, Brennan, and Rogers (DNI, CIA, and NSA Directors, respectively), also showed the two leaders a summary of research found by a respected British intelligence operative that shows evidence Russia was in possession of harmful information about Trump, as well as Hillary Clinton.

The notion that the Russian government had defamatory information on both presidential candidates, yet only released the smoking gun on Clinton, points to the unconfirmed notion that perhaps, someone on Trump's team could allegedly have been negotiating a deal with Russia in order to protect Trump, though that much can't yet be confirmed.

In fact, during the election cycle, no outside source came out with harmful information against Trump. Of course, the numerous inside allegations (somehow) weren't enough to permanently damage his reputation, but it's unclear what this undisclosed information would have done, had it been released before the election.

What is clear, however, is that Trump was in fact informed of this new information over a week ago, according to CNN, and has yet to make a statement on the matter, instead choosing to focus on tearing down Meryl Streep (are we surprised, though?).

Along with his many many tweets encouraging stronger relations with Russia, and hailing Vladimir Putin as a good man, this new information, albeit shocking, isn't exactly off-base.

While we can't know for sure what those files and memos say exactly, as they're still highly classified, we do know for sure that there's more to this Russian hacking story than first appears.