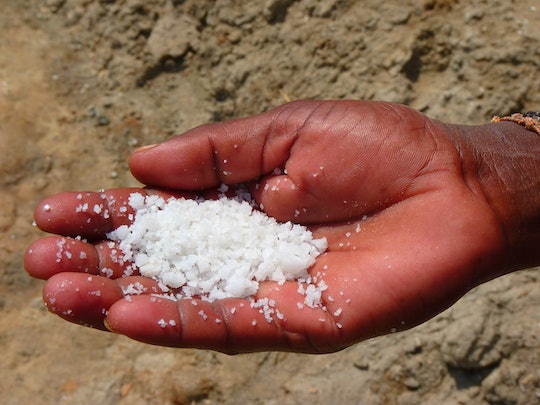 Who knew salting prime slabs of meat could be so sensual? World, meet your latest internet sensation-slash-obsession: Salt Bae. He's Nusret Gökçe, a Turkish restaurateur with a righteous ponytail and a penchant for low-cut shirts, who has turned seasoning beef into sultry social media performance art that's earned him meme status and legions of fans. But the real question on everyone's mind is, of course, is Salt Bae married? His relationship details are murky, but here's what we know..

Gökçe is the owner and chef of the Nusr-Et Steakhouse restaurants in Turkey and Dubai, according to New York Magazine, who has attracted international attention for the sensual way in which he prepares all sorts of cuts of meat. Some of his video greatest hits show him massaging and buttering what looks like a beef tenderloin, spanking the rump of a butchered goat, and slapping around perfectly marbled steaks. But the finale is usually the salt. With great finesse he holds his pinched hand high above the meat and sprinkles on the salt with incredible fanfare. It's almost a dance. A sexy meat dance that makes all other food porn look like an episode of Barefoot Contessa.

Take a look at this video that launched the #SaltBae meme on social media:

While the whole show is mesmerizing, it's the salt sprinkle at the end that elevates the video into internet infamy.

According to FirstWeFeast, Gökçe has been making these videos for more than a year, but they were just discovered by the rest of the internet last week. And the result has been the birth of 2017's first bona fide meme.

The internet hoards are officially sprung on #SaltBae, and left wondering about his relationship status. While the specifics of Gökçe's love life aren't clear, he's obviously got plenty going on in that department. Feast your eyes on this Instagram image of Gökçe along with his nine kids, according to New York Magazine. Yes, that's right, nine. The caption on the Instagram image translates, according to Google Translate, very roughly to: "The man who does not spend time with his family is not a real man."

#SaltBae doesn't appear to be wearing a wedding ring in any of his images or videos, but with nine babies, at the very least his status has to be a bit complicated, right?