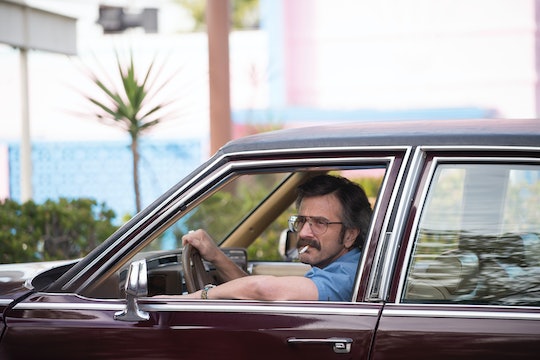 'GLOW' Takes Inspiration From Its Predecessor

Netflix is launching a new series called GLOW this month, based on the real-life female wrestling show from the '80s. The project is labeled as a comedy, starring Allison Brie, but the Gorgeous Ladies of Wrestling was actually a real thing. So is Marc Maron's character from GLOW, Sam Silvia based on a real person? Not exactly. Although GLOW was an actual television show, the characters in the Netflix series merely use its predecessor for inspiration without specifically basing them on actual, real-life people. For example, Marc Maron is playing Sam Silvia, the director of GLOW, who is described as being a "washed-up, B-movie director who must now lead this group of women and a journey to wrestling stardom."

However, the real creator of the original GLOW wasn't named Sam at all. He was Matt Cimber, an Italian-American director. He might have been B-list back then, but he had a long and pretty successful career as a director. He did mostly blaxploitation films, which Samuel L. Jackson has called some of his favorites. Quentin Tarantino also said that Cimber's films were some of his favorite movies. Cimber was married a few times, but one of his ex-wives was Jayne Mansfield. If that's washed up, what's successful?

So is it possible that Sam and Cimber will share certain personality traits? Absolutely. But it doesn't seem as though the character is meant to be a full-on representation of the real-life director. Because while the show itself did exist, all the character are described as fictionalized. Though that doesn't mean they weren't draw from real-life inspirations.

It is pretty amazing that the Gorgeous Ladies of Wrestling was as successful as it actually was back then. The women were in different groups — and Jackie Stallone (Sylvester's mother) was the ringleader of the Good Girls. There are some other hysterical aspects to the show, too. Like the fact that every woman had their own rap song (yes, really) with personalized lyrics. Fun trivia fact? In its latest iterations, the son of Matt Cimber and Jayne Mansfield was dragged around on a leash in some episodes — and he's Law and Order SVU's Mariska Hargitay's half brother. Forget about the Six Degrees of Kevin Bacon. It sounds like the Gorgeous Ladies of Wrestling really unites Hollywood.

But just because Sam Silvia and the other characters in the Netflix show aren't based on real people, the Netflix series will definitely mimic the absurdity and fun of the real show. This is definitely a must-see.