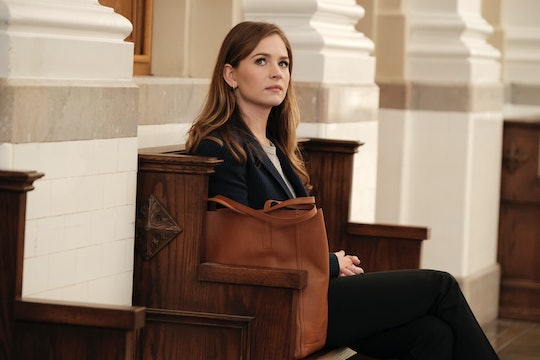 That's right folks, Shonda Rhimes is producing a new show for ABC and it looks like it's going be another fun and soapy drama that you won't be able to look away from. You may even be wondering how much of the show is based on real life. Take the show's lead, for example. Is Sandra from For the People based on a real person? Real or not you're definitely going to want to root for this fierce and principled hero. Just like any Shondaland protagonist, Sandra Bell is incredibly intelligent and definitely not to be messed with.

For the People pits a group of three public defenders against three prosecutors, all working at the Southern District of New York Federal Court, or, as the show calls it, the "Mother Court." Sandra Bell is the clear protagonist and stand-in for the audience. She arrives alongside her best friend Allison Adams, as they attempt to not get crushed by their own weighty jobs. And because it is a Shonda show, I fully expect to see at least one professionally questionable relationship, plenty of heartfelt speeches, and last-minute brilliant maneuvers. At the very least it definitely looks like it's got the snappy dialogue and brilliant characters that Rhimes is iconically known for.

Sandra is played by Britt Robertson, who's already no stranger to being on TV. You may recognize Robertson as the lead on the charming Netflix show Girlboss. She has also acted in several movies, including The Space Between Us and Tomorrowland, where she typically portrays a plucky teen girl who's uncowed by authority and tends to teach the adults around her a thing or two about the real world. However these days it's clear that Robertson is no longer a teenager. Now she's fighting cases in court against some qualified (and attractive) rival lawyers.

There's no evidence to suggest that anything about For the People beyond the setting is based on real events or a real story — and that includes the characters. I don't doubt that plenty of fierce and intelligent young women have worked at this court before, but it doesn't look like Sandra Bell is based on any particular woman. She is, instead, a creation out of the writers' minds, which means that the audience gets to make of her what they will with no preconceived notions of what she's "supposed" to be like. As the lead of the show, the audience will see the events unfold mostly from her eyes.

Being on the public defenders side of the table, Sandra is an obvious "good guy" as opposed to the prosecutors who are the natural "bad guys." However early reviews of the show promise that it avoids such over-simplifications, and spends as much time making the hard-edged prosecutors sympathetic and lovable as it does the more soft and fuzzy public defenders. At the end of the day neither side is necessarily good or necessarily bad.

Considering the fact that the much beloved Scandal is on its final season, the world needed another Shonda Rhimes show for ABC, with all the melodrama and brilliance that usually accompanies them. Sure these shows are often slightly over-the-top, but isn't that the reason people watch TV?

For the People, as a legal procedural, probably won't flip the genre on its head just yet, but I'm excited to see all the romance, intrigue, and impassioned court speeches that are sure to come all the same. And I'm eager to have another fictional female heroine to idolize.