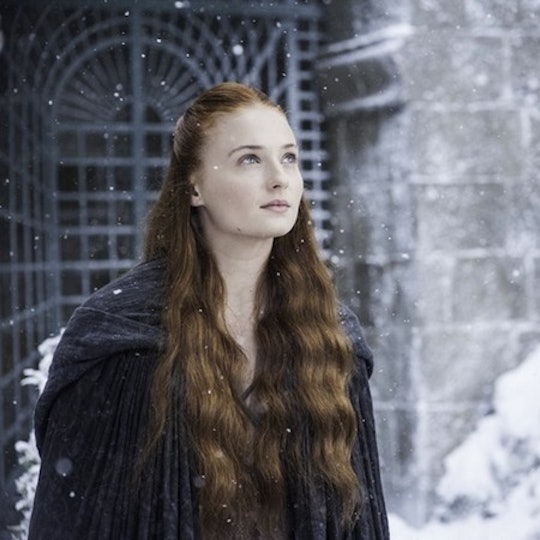 Is Sansa Pregnant On 'Game Of Thrones' Season 6? It'd Be The Worst News Ever

First, Beyoncé gave us Lemonade. And tonight, it's Game of Thrones' turn to offer something to the world. And just minutes into the first episode of Season 6, we spot Sansa and Theon (Reek) on the run — and though it wasn't exactly the news we were hoping for, fans were quickly wondering is Sansa Stark pregnant? Just before the scene pans out to Sansa and Theon as they cross ice-cold water in an effort to throw off the scent of Ramsay's hounds, we catch a rare glimpse of life at Winterfell under Bolton control. Ramsay's father, Roose, threatens Ramsay, insinuating to his bastard son that if he doesn't produce an heir to the throne, well, he's pretty SOL. Though it's horrible that Sansa's importance in her birthplace has been reduced to her ability to "produce" an heir for a man who's raped and treated her as less than human, this is where we're at on Game of Thrones, and that means we've got to deal with what's in front of us. So, is she pregnant? And my god, if she has to be pregnant, does it have to be Ramsay's?

So far in the debut episode of Season 6, there's nothing to indicate that Sansa Stark is with child. Though we were all subject to the unnecessary rape of Sansa in Season 5, it was the only documented time that we saw Ramsay and Sansa have sex. It's entirely likely that they could have had sex on other occasions beyond their wedding night, but because things move so quickly on Game of Thrones, we won't exactly know. (And TBH, I don't want to know.) Point is, it doesn't leave that much wiggle room when it comes to the is she or isn't she question. Murphy's Law would dictate that the very thing we don't want to happen will totally happen this season (and come on, it's Game of Thrones, of course they're going to f*ck us over and she's going to pregnant), however, I'm holding out hope that maybe, just maybe the law is wrong this time.

If Sansa is pregnant, that is terrible, horrible news for both Stark fans IRL and Stark loyalists on the show. A Stark heir would pull with it the support of the North for Roose and Ramsay Bolton, and it would be the thread that would forever tie Sansa and Ramsay together. When Brienne happened about Sansa and Theon to save them like the Knightess in Shining Armor that we all need her to be, Sansa was cradling her stomach, giving off every indication that she was pregnant. Or maybe she was just really cold? (Let her be cold. Let her be cold.)

Fans were quick to weigh in, and their responses provided everything Game of Thrones' showrunners need to know before this potential storyline gets any further along: DON'T. LET. SANSA. BE. PREGNANT. Just don't, OK?

Obviously time will tell whether or not Sansa is expecting, and though all we can do is hope at this point, we can also all at least put our collective energy into hoping she's pregnant with a girl.