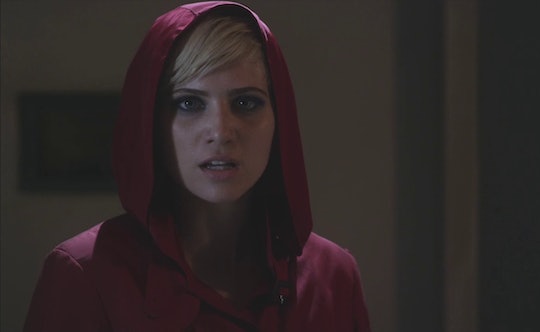 Is Sara Amoji On 'Pretty Little Liars'? She's Up To Something

Sara Harvey has been shady ever since she showed up on Pretty Little Liars, and she's equally hard to get a read on. When her name first came up on the show (when Hanna and Emily were investigating girls who went missing around the same time as Alison), she sounded just like Alison: beautiful, controlling, and mean. It was a suspicious parallel that would end up being important foreshadowing, but by the time Sara actually showed up on the show in person, she seemed like little more than another victim, one more person tormented by A. The reveal that she was working with CeCe Drake was not an entirely unsurprising swerve, and Sara has been on the bad side of the Liars ever since. But is Sara Amoji on Pretty Little Liars?

Amoji – the A who is free with their emoji usage – and Uber A appear to be different, but equally creepy, stalkers. Amoji wants to know who killed CeCe, but it looks like Uber A might very well be the perpetrator. With two omnipotent bullies with opposite goals harassing the girls, it's no wonder they can't make heads or tails of the entire situation. Emily's personal betrayal makes her particularly wary of Sara, but so far in Season 7 Sara has been offscreen – out of sight and out of mind. And since Sara's been gone, so has Amoji.

Sara has been CeCe's helper for years. While she claimed it was Stockholm Syndrome (and she didn't look great when she was locked up in that dollhouse), the Liars have always doubted her story. If Sara and CeCe were really as close as sisters and Sara was helping out of her own volition, then Sara wouldn't have wanted CeCe dead. This tracks with Amoji's mission: to find the killer.

There's more going on with Sara than meets the eye – that much has been true from the start. Her burned, gloved hands occasionally have a whiff of Jenna's sometimes-fake blindness about them, and she's definitely hiding something. Sara is always lurking where she doesn't belong and even though she can use her injury as an alibi, that doesn't mean she's not involved.

Her history with Emily might be key. Emily and Sara have been linked for a while now thanks to being roomies and girlfriends post-dollhouse; Emily has always been a specific target of Sara's for some reason. It was also Emily punching Sara that made Sara disoriented enough to get electrocuted. She shows up where Emily is over and over. And Amoji made a point of going after Emily too, by stealing her eggs and leaving her ominous groceries.

There are also theories that Sara has an even deeper connection to CeCe's past. Some fans believe Sara is actually CeCe's sister, Mary Drake's other child who was adopted by another family, which is plausible considering how many secret kids come in and out of the DiLaurentis family. Still others believe that Sara is Bethany Young or is related to her; Bethany was one of CeCe's "friends" from Radley and the girl who was buried in Alison's place. If Bethany was Sara's sister – or if Sara is Bethany using an assumed name – then she'd definitely have cause to make trouble for everyone.

I wouldn't put it past Pretty Little Liars to reinvent the past once again to give Sara even more ammunition to go after the citizens of Rosewood. While there's nothing connecting her to Amoji outside of a boatload of suspicious activity, there's no doubt that Sara is up to something.