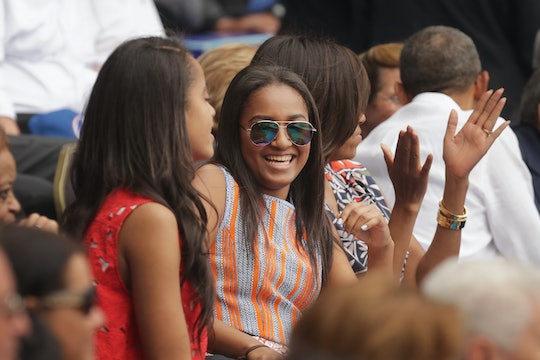 Believe It Or Not, But It Sounds Like Sasha Obama Is Officially A College Freshman

Though their eight years as first daughters may have come to an end, there's no doubt that Americans still want to know what the Obama daughters are up to and what incredible feats they are going to go on to accomplish in their lives. (They were raised by Barack and Michelle, after all.) So considering that their youngest just graduated high school, is Sasha Obama going to college this fall? As it turns out, according to The Detroit News, the 18-year-old student was reportedly seen at University of Michigan's class of 2023 orientation recently.

Though their private lives have been just that — private — since their father's second tenure as president ended, the Obama daughters still have enough clout and interest surrounding them that they will likely be lifelong individuals of great public interest. And while this is the case, their late teens and early 20s are a really precarious time, and they deserve some privacy while they figure out who they are, and what their next steps in life will be.

For the most part, they've been granted this, which is likely why there has never been an official announcement regarding their college admissions. According to The New York Times, Sasha's older sister Malia Obama took a gap year after high school, during which she did not yet enroll in college, and instead took time to travel, or self-reflect, then heading off to Harvard University.

As for, Sasha, who recently graduated from high school, she has reportedly enrolled at the University of Michigan, in Ann Arbor, Michigan, according to The Detroit News. One Michigan student, who reportedly witnessed Sasha preparing for orientation, told the newspaper, "I was walking by pushing a vacuum and she walked out right in front of me. I said, 'Excuse me.' It was a crowded hallway with her and some Secret Service dudes. It's pretty cool."

Though the college is unable to confirm who is or is not a student, speculation arose that this was Sasha's school of choice when she reportedly posted a photo to Instagram in December and tagged herself at Ann Arbor, the school's location, as Newsweek reported. "So proud to say I'm going to college with my sisters!!" Sasha reportedly wrote on an image of herself and two friends at the University's football stadium.

"We do not have any information to share," University of Michigan spokesperson Rick Fitzgerald told CBS News regarding Obama's potential enrollment. "We're excited about starting another academic year. We welcome all students to campus and wish them all much success in their time at U-M."

Given that the Obamas have not released any confirmation of her enrollment, and likely won't unless Sasha herself wants to share, it's not clear whether she will be following in her mother and sister's footsteps and studying law. Of course, there are so many other paths that she could take in life, she shouldn't feel any pressure to do what her family has done in any way. Regardless, it's exciting to see another Obama growing up and starting her own life, however surreal it may be.