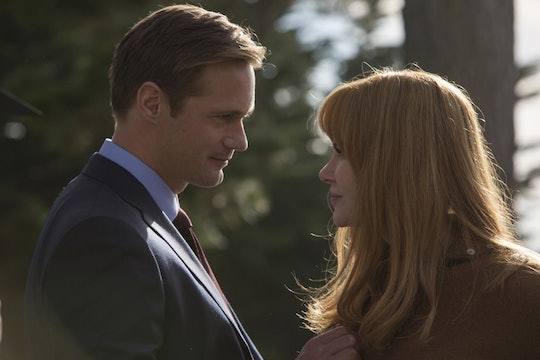 Perry May Have A Dark Past On 'Big Little Lies'

From the first episode of HBO's Big Little Lies, we had a feeling Jane had a traumatic backstory. She just moved to Monterey with her son, Ziggy, so no one in the nosy community of parents knew anything about it yet, though as the audience, we saw it all via flashbacks. It was revealed in the third episode that she was assaulted by a man named Saxon Banks. Is it possible that we have already met Banks — and it actually wouldn't be that much of a surprise? Is Saxon Banks Perry on Big Little Lies? Jane may be closer to her assailant than she realizes.

What happened to Jane? In the first couple episodes, we didn't know much. We saw flashbacks of her running on a beach in a torn dress. She was running towards a man in a suit. These were intercut with other flashbacks of her on a bed in a hotel room, alone. In the third episode, Jane revealed to Madeline what she went through: she was attacked by Saxon Banks, and it resulted in her pregnancy. Madeline is the only person Jane has told; Banks does not know about Ziggy, and Ziggy doesn't know who his father is. Jane moved to Monterey — at least partly — to escape her past.

We know that the assault occurred six or seven years ago, given Ziggy's age. Jane just settled in Monterey, too, so she may have no suspicions that Saxon Banks could be nearby. While she hasn't had contact with him, it's clear that he still haunts her. In addition to flashbacks, she has visions of someone breaking into her home. Perhaps she thought moving away would help clear her mind.

Jane, however, may have only gotten herself closer to Saxon. As of now in the series, it's unclear whether Saxon Banks is actually another character. If he is, though, signs point to him being Perry: he is an abusive husband to Celeste and he travels a lot, so it would be easy for him to commit adultery during business trips. There are several other men on the show — like Ed and Nathan — but they don't have these characteristics. (Warning: spoilers from the novel ahead!)

If you've read the novel, you know Perry is indeed Saxon. It is the name of one of Perry's cousins, whom Celeste met during a family reunion. Madeline, ever the gossip, couldn't help but tell Celeste Jane's story. For awhile, the two suspect the real Saxon assaulted Jane, but once the name is dropped during Trivia Night, the truth comes out. Will the same occur in the series? Judging from how the the events have played out so far, it's likely – but we're definitely going to keep watching to see what goes down.