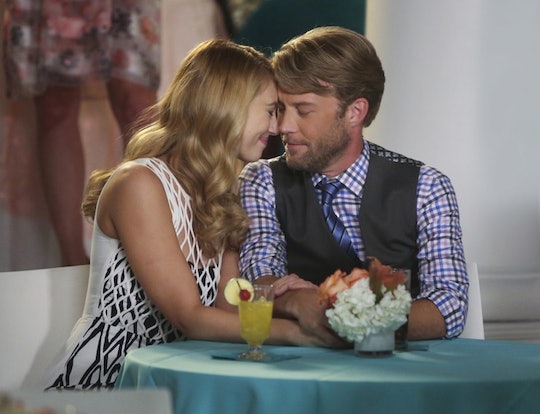 This Death May Not Be What It Seems On 'JTV'

Jane the Virgin is a show that obviously doesn't shy away from twists. Fans are still reeling from the surprise death of Jane's husband, Michael, but they still had enough shock in them to be surprised by the appearance of Scott's corpse in last Monday's episode. It appears the three year time jump wasn't good to Scott, which evidently led to his untimely demise. Or did it? Is Scott really dead on Jane the Virgin, or is the show just setting us up for yet another surprise twist?

Unlike with the death of Michael, none of the actors are coming forward to confirm that Scott is truly dead. To be fair, this is most likely because Scott was nowhere near as beloved or adored as Michael was. (Sorry, Scott, but it's true.) Still, Scott's death seems a bit sketchy and like with most shows, unless you actually see the character get killed, you should never trust that they're actually dead. Just look at how long fans were led to believe Rose was dead until she popped back up and shot Michael. (Something I will never forgive her for, by the way.)

All fans saw was a corpse in Scott's uniform. If Scott was trying to fake his own death he could've killed someone else or somehow gotten his hands on a corpse and then put his uniform on the body to make it look like he was the one who was killed. Alternatively, if someone abducted Scott, they could've done the same thing so no one would come looking for him.

However, if it's not actually Scott's body, fans will probably know by the next episode. No doubt, once the cops get involved they'll be doing a DNA test on the body to confirm it is, in fact, the person we think it is. If it's not, I'm curious to know who it is. Anezka maybe?

Though it'd be a nice twist to discover Scott's not actually dead and he's really off causing havoc somewhere else, I truly think Scott's a goner. For one, based on Rafael's question about "what ever happened to that guy," I have to assume Scott's been missing for a while. If Scott was really alive and off hiding somewhere, why plant a fake body? That just brought more attention to the fact that Scott disappeared.

It seems much more likely that someone killed him and now they're about to get caught. The only real question is — who is the culprit?