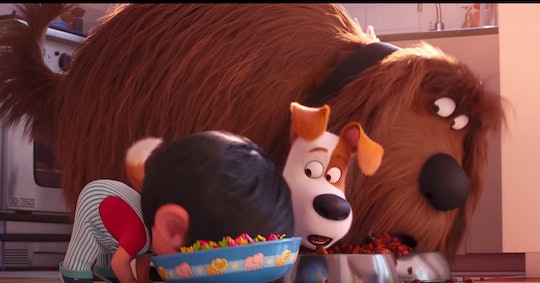 Is 'Secret Life Of Pets 2' OK For Toddlers? Here's What Parents Should Know

For families with school-aged children, summer break is in full swing — meaning the marathon of keeping the kiddos busy and entertained has arrived. One of the go-to summertime past times (aside from the pool, park, and library) is the local movie theater. And for many families, The Secret Life Of Pets 2 is already on their must-see list. However, some parents might be wondering: Is Secret Life of Pets 2 appropriate for toddlers?

Because it's a kids' movie, many would think it'd be perfectly safe to take a child of any age. Sometimes, though, it's not always that simple. For starters, I'd like to point out that this sequel — like the 2016 original — is rated PG. According to Mental Floss, the Motion Picture Association of America's Classification and Ratings Administration describes the PG rating as, “Parental Guidance Suggested. Some Material May Not Be Suitable For Children… The more mature themes in some PG-rated motion pictures may call for parental guidance. There may be some profanity and some depictions of violence or brief nudity… There is no drug use content.”

This rating description is important to keep in mind. Because more than once, I was caught a bit off-guard when I took my four children — ages 7, 5, 3, and a baby — to watch The Secret Life of Pets 2.

If you're familiar with the original movie, The Secret Life of Pets 2 continues the story of Max, his animal friends, and their owners. (Max is voiced by Patton Oswalt this time around — after Universal Pictures and Illumination Entertainment cut ties with Louis C.K. in light of the sexual harassment allegations against him, according to CinemaBlend.)

As the official trailer shows, the storyline includes Max's owner, Katie, getting married and having a baby — but obviously, that's not all that happens. I won't post any specific spoilers, but let's just say parents should be prepared for some mild violence.

According to a brief overview by The Washington Post: "The dark humor and peril are toned down from the original, with more of a shift to slapstick violence that’s meant to be funny. Animals punch and throw knives at one another, and a [person] is hit by a car, but no one is ever really injured."

It's worth noting, too, that there are some instances of animal abuse in the film, according to Datebook, just in case your little one is particularly sensitive to things like that. As far as language is concerned, IMDb notes there's "mild" profanity, such as the use of "jerk," "idiot," and "stupid." There is also a sequence during which a cat is (hilariously) high on catnip.

Finally, there's a scene during which a single swear word is used. The character Pops informs Snowball that he "pissed off Pickles," who is one of the puppies in his class.

One reviewer summed it all up perfectly for Week99er.com: "While individually the issues may not seem that big, combined together it makes us question the need for these scenes in the movie in general. These should be considered if your kids are sensitive or you don’t want to expose them to them. The line with the curse word landed in the theater like a lead balloon, while most kids missed it — it wasn’t missed by the parents."

As someone who recently watched The Secret Life of Pets 2 with a 3-year-old, I'd say the movie is OK overall for toddlers — as long as your little one isn't overly sensitive to mild violence. (My daughter loved it.) Although I slightly did cringe at the "pissed off" bit, to be completely honest my kids have heard worse at home. The whole person-getting-run-over-by-a-car scene, as The Washington Post detailed in its review, was a bit jarring, too. But, in the end, the character seemed OK.

With all this said, you know what to expect from The Secret Life of Pets 2, and can plan your movie theater visit according. Ultimately, it's a judgement call by parents — because, of course, you know your child the best.

More Like This
Julia Fox’s Apartment Tour Is Peak Mom Realness
What Parents Need To Know About Marvel's New Movie Ant-Man & The Wasp: Quantumania
'Titanic' Is Returning To Theaters In Honor Of The Movie's 25th Anniversary
What To Do If Your Toddler Keeps Taking Off Their Diaper At Night
What Parents Are Talking About — Delivered Straight To Your Inbox