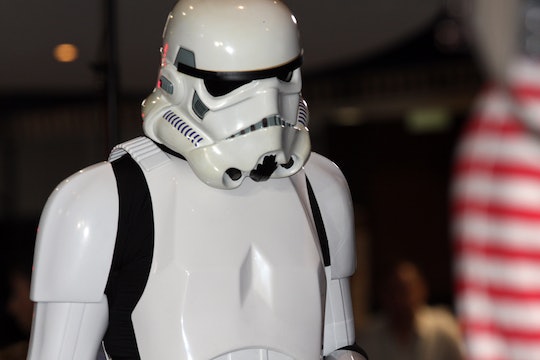 Is Seeing 'Star Wars: The Force Awakens' In 3D Worth It? It's The First Film Of The Franchise To Be Released In 3D

Star Wars is trending on Google, Facebook, and Twitter, because it will be epic. Every friend I know is talking about, many writers I know are writing about it, and it seems Star Wars mania is in full effect (says the writer wearing a Star Wars cardigan...and a Wookie coat). The film will premiere at midnight on Friday in both 2D and 3D, but is it worth it to see The Force Awakens in 3D? Will it be worth the hype, and will be worth shelling out an extra few bucks? The answer is a Forceful (see what I did there?) "yes" for a few reasons.

Star Wars: The Force Awakens will be the first film in the franchises 32-year history to debut in 3D, according to the Hollywood Reporter. While Disney did plan to reformat the prequels when they acquired the series from Lucasfilm, only The Phantom Menace saw a 3D re-release before they canned the entire project. This means The Force Awakens has the potential to show us the Star Wars universe in a way we never thought — or imagined — possible.

That said, The Force Awakens was not filmed using a 3D camera, which, admittedly, is a bit of disappointment. (The latest addition to the Star Wars series was shot on 2D cameras and converted to 3D during post-production.) However, the movie's effects are said to be so good they were able to convert director J.J. Abrams to the “dark side” of 3D. (Abrams has disliked 3D for quite some time.) Abrams said parts of the movie seem to play better in 3D, according to the Hollywood Reporter:

As someone who really hasn’t been the most vocal advocate of 3D, the strangest thing happened to me on this. When I was watching the reels in 3D, there were a number of shots — and I know this sounds insane — that I hadn’t understood in the three-dimensional space quite the way I did when I saw them in 3D. I actually felt that there were things that were playing better in 3D. I had never felt that before.

The visuals are amazing. Everything looks so crisp and clear...[and] the 3D was handled well also. The opening crawl looks great in 3D and the fight scenes are gorgeous. Seeing it in 3D may not be essential but is a great treat and does add more depth to certain scenes.

While some may still remember the 3D movies of the 80s’ and 90s’ — the ones that caused headaches and eyestrain — 3D today looks much different, whether it is shot on a 3D camera or converted in production later. So the question isn’t “is it worth seeing The Force Awakens in 3D” but “why shouldn’t I splurge and see the latest film in all its visual glory?”