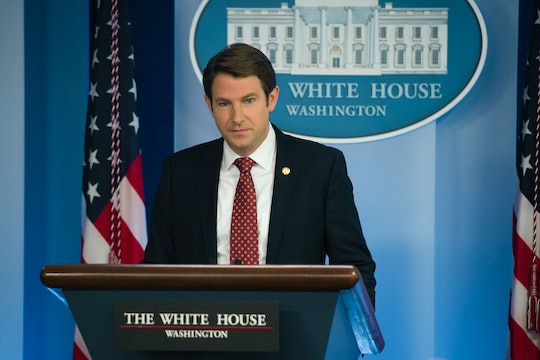 Is Seth Grayson Working For Heather Dunbar On 'House Of Cards'? Frank Might Regret Pushing Him Away

Back in Season 3 of House of Cards, Doug Stamper and Seth Grayson were constantly trampling each other for Frank Underwood's approval. When Doug fell off the wagon, Frank enlisted Seth to keep an eye on his former Chief of Staff. Even though Seth followed Frank's command, he seemed to do it begrudgingly — he wasn't a babysitter and clearly wanted more responsibility. (Spoilers for Season 4, Episode 3 of House of Cards ahead.) Seth and Doug never seemed to really get along, so now that Doug is back in the White House and in Frank's good graces, you can't blame Seth for possibly working with Heather Dunbar on House of Cards Season 4.

With Doug back in the White House and his position restored as Frank's favorite, he and Seth are back to the same pissing contest they've been in for a while now. Don't forget, before Doug came back on at the White House, Seth wanted the Chief of Staff position that Doug eventually filled. Frank didn't particularly take well to Seth wanting to leave his post in communications, which probably didn't help in keeping Seth happy and loyal to Underwood 2016.

Then, Doug openly suspected Seth of betraying Frank by demanding he hand over his phone and email records after a photo of Frank's father shaking hands with a KKK member gets leaked and splattered across a billboard. Indignant over the accusation (which did turn out to be false, in Seth's defense), Seth responds by leaking other, further damning information to the press, because Seth can't seem to stop sucking. In this case of suckery, he leaks a photo of Frank shaking hands with a confederate soldier from a Civil War reenactment, which does not help Frank's current image in any way. It turns out the original traitor, however, was Claire, who was merely trying to sabotage Frank's campaign so badly that the only way he'd still be a viable candidate was if she was his Vice President (it's not the most outlandish plot on the show).

Like many before him, Seth started considering a change in allegiance. Did he need to remain loyal to Frank if Frank didn't see him as a crucial member of the staff? To explore his options, Seth approached Heather Dunbar's Chief of Staff in a dingy dive bar to inquiry about what his position there might be if he were to switch allegiances. Clearly, Seth is feeling vulnerable over at FU2016 — evident in Frank's nosedive in popularity, heat from Doug, and his own complicity in undermining the Underwood campaign.

Unfortunately for Seth, the Dunbar campaign was still struggling with felonious whistleblower Lucas Goodwin who happens to be out of jail and still trying to avenge Zoe Barnes' death, so they have bigger fish to fry than worry about Seth Grayson. But it does make you wonder if Seth will actually try to jump ship to save himself before going down with Underwood 2016. Or, maybe he'll remain loyal to his captain and go down with everyone else.