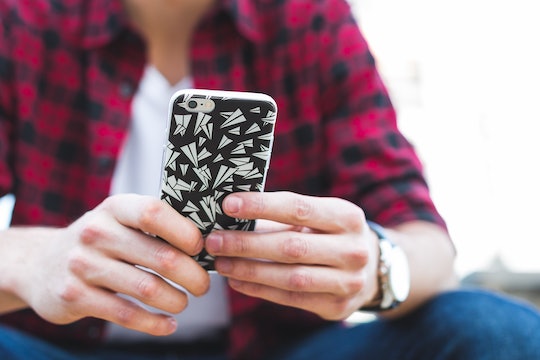 Being in a long-term relationship isn't the easiest thing you'll ever do. Sometimes it seems like it's more boring happenstance of everyday life than the soul searing waves you expected growing up, but that's life. Most of life is just living, and some people get tempted into alternative means for seeking out that extra moment of excitement they feel they're missing out on. In the digital age, the temptations to chat up someone who isn't your partner are plenty and readily available, and it can get pretty heated. But, is sexting considered cheating, or is it a moral gray area that is maybe dishonest, but not a betrayal?

In an informal online survey in Sexuality and Culture, 28 out of 30 respondents replied definitively that sexting is absolutely cheating. The remaining respondents said that it is cheating if your partner is unaware of it and doesn't approve of it, and the last said that it's a lie and not acceptable, but not cheating. If it's infidelity, where does it fall on the scale of deceit? It depends on your relationship with your partner. It might not hurt some people as much as the actual physical act of sex would, but for people, the act might be just as painful, if not more so because of the implied emotional intimacy.

An article in Psychology Today stated that situational cheating, or cheating that is due to opportunity as much as personal inclination or problems in the relationship, is one of the most common forms of infidelity. Since the advent of the iPhone, we've all been walking around with a situation waiting to happen. The temptation is built-in. An old friend on Facebook messages you, you meet someone on Instagram, or someone finds you on a Snapchat map and sends you a snap. It could all begin innocently enough, and soon balloon into a full-blown internet based affair — but is sexting cheating, or is it just a lie?

I spoke with a woman, who wishes to remain anonymous, whose marriage of six years ended because she found out her spouse had been sexting with multiple people on Twitter. She tells Romper, "I found out when I saw a notification pop up on his laptop when I was paying the bills. The message was really explicit, so I clicked on it, thinking I'd delete it because it was likely a bot. When I opened his twitter, I found several other similar messages, and his responses to them. My world broke in that minute. Here I was, nursing our son, paying our bills, reading these really sexual conversations between my husband and other women, two of whom I knew personally."

She said that immediately, she was terrified that he'd had unprotected sex with these women and that he'd brought an STD back to her. "I was scared. I'm an accountant, not a scientist, and these had been going on since I was pregnant. I worried I'd passed something on to our son." She decided to take screenshots of the conversations, emailing a copy to herself, one to her now ex-husband, and one to her attorney. "When he got home, he explained that he'd never actually met up with any of the women. He said he did it for the excitement of it, but would never actually cheat on me. I believe him that he didn't sleep with them, but he cheated on me on Twitter as surely as if he was meeting these women at hotels."

I spoke with divorce lawyer, Kendall Moore of New York, and she says, "I get more and more cases every year where the parties are separating because of a sexting incident. While it's not specifically designated by law as an act of infidelity that would say, nullify a prenuptial agreement, that doesn't mean it's not considered in the decision. Five years ago, I had only one divorce in that calendar year related to sexting, so far this year, I have three times that number."

Sexting with someone who isn't your partner may not be a physical act of cheating, but the emotional impact is real and deep, according to Sexuality and Culture. It's a phenomenon that many partnerships cannot survive. You might not think sexting is cheating, but consider how you'd feel if the shoe was on the other foot before responding to that message from your old high school flame. It's likely not worth it.