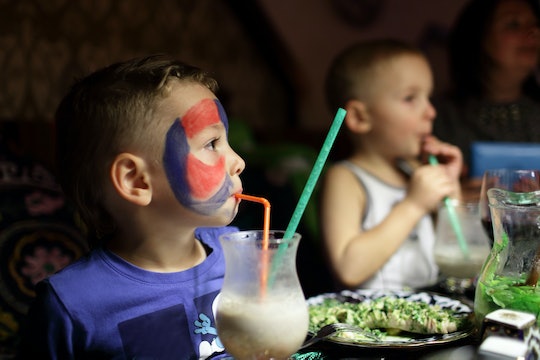 Oh, multi-level marketing. It's everywhere. I remember growing up, you could buy makeup, kitchen tools, and reusable food containers from your neighbors, but not much else. Now you can buy anything from sex toys to health shakes like Shakeology. The ingredients in the latter definitely make the shake sound like a superfood, which is helpful for those with picky eaters. But, is Shakeology safe for kids, or should you stick to making your own smoothies?

The traditional, original Shakeology mix is labeled "keep out of reach of children," according to the Beachbody website, and for good reason — it's not designed for them. It has caffeine and herbal supplements like cordyceps that are dangerous enough for children that hospitals warn against its use.

However, in recent months, the folks at Beachbody, LLC have come out with a kids' version of the popular shake called Daily Sunshine. It's night and day compared to traditional Shakeology, with none of the superfruit blends. In fact, there's really nothing exotic in it at all. It's essentially powdered fruits and veggies, chocolate (in one flavor), and stevia. It's vegan and vitamin fortified. Which to me, all sounds great. Also, it's very alluring. You're able to get nutrients into your kids, and maybe they'll even like it. Who knows, right? But even if I can pronounce all the ingredients, is Shakeology safe for kids?

I spoke with Registered Dietitian Sara Kim of Brooklyn, New York to get her take on the shakes. She tells Romper, "Everything in the ingredient list looks alright to me, but maybe for the Stevia. While the American Academy of Pediatrics (AAP) considers Stevia to be generally thought of as safe, recent studies have shown that artificial sweeteners actually make us crave sweets more than less. So while it may be perfectly safe, that doesn't mean it's a good way to get nutrients into your kids."

Kim went on to say that picky eaters are a problem, but they're nothing new. "Very few children exist who aren't picky about what they eat. Bitter foods are hardest for kids because their brains tell them it might be dangerous, and all of their tastebuds are new and fresh and work a lot better than ours do." She says when we're kids, we learn to eat, so giving them a shake everyday and calling it vegetables can mislead them to think that all nutrients taste like that, and they won't learn to love the real thing. Kim says it's more important to keep trying with the real vegetables and getting the whole foods into them than it is to just shove nutrients at them.

Another thing to note with Daily Sunshine, however, is that it's also really expensive. (Which, to be honest, is why I would say no.) My son is on the autism spectrum, and it's made him particularly picky. He really only loves spicy foods. Yes, oddly enough, that boy will eat a plate of seaweed and bok choy, but if I were to give him grapes or a sweet potato? He'd turn his nose at it. I love the idea of being able to give him something fast that he might eat. But it's $130 per month, per child. I cannot justify spending all that money on something that may not be as good for him as the manufacturer claims. In the end, if you're really curious about it, talk to your pediatrician and see what they say, but for me, I'm going to try hot sauce on sweet potato fries later.