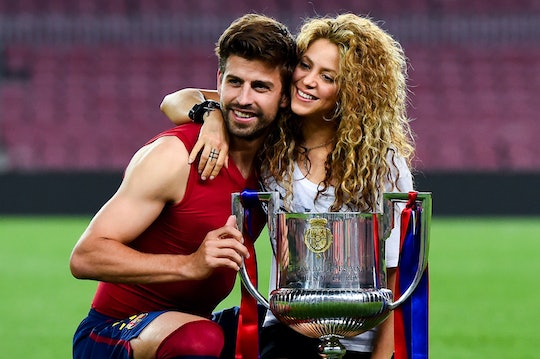 Shakira Is Happily In Love With Gerard Piqué, But Doesn't Want To Get Married

Shakira will join forces with Jennifer Lopez on stage for the Super Bowl LIV halftime show on Sunday, Feb. 2. And beyond all of us watching in awe will certainly be the Colombian singer's other half. While Shakira isn't married, she's been in a long-term relationship with Spanish soccer star Gerard Piqué for nearly a decade. Some fans might disagree, but I think it's fair to assume that he's Shakira true, #1 fan.

Shakira has been with Piqué since 2011, according to Oprah Magazine. The singer was recording the music video for her song "Waka Waka (This Time For Africa)" in 2010, which was also the anthem for the 2010 FIFA World Cup tournament that Piqué was playing in with his team, FC Barcelona. Piqué ended up shooting a second-long cameo for the video, and also ended up catching Shakira's eye at the same time. She recounted this meeting during an interview on CBS' 60 Minutes, which aired earlier this year. "I wasn't a soccer fan, so I didn't know who he was," she explained. "But when I saw the video, I was like, 'Hmm. That one's kind of cute.' And then someone decided to introduce us."

While they share a life and children together, Shakira also told 60 Minutes she does not want to get married. "To tell you the truth, marriage scares the s— out of me," she said. "I don't want him to see me as the wife, I want him to see me as his girlfriend. It's like a little forbidden fruit, you know? I want to keep him on his toes. I want him to think that anything's possible, depending on behavior."

While Shakira doesn't want to get married, she does seem quite happy with her boyfriend and their two sons. Shakira gave birth to their first son Milan in January 2013 and the couple welcomed their second child, a son named Sasha, in January 2015.

Shakira has also previously gushed about how hands-on Piqué is as a dad. "He has been amazing," Shakira explained to Us Weekly in 2013. "The baby spends as much time with me as he does with his dad. He's the kind of dad who's full hands on. He changes diapers, he bathes him, he enjoys feeding him, all of that stuff."

Piqué not only sounds like a great dad, but a great partner to Shakira, especially since they seem to be on the same page when it comes to parenting and marriage.