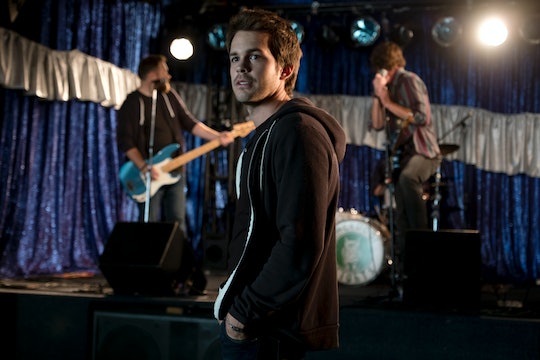 Shane From 'Girlboss' May Come From Real Inspiration

Girlboss, the newest offering from Netflix, is loosely based on the life of Nasty Gal founder Sophia Amoruso, but there are some fictionalized touches amongst the truer aspects of the story. The trailer shows Britt Robertson's Sophia starting a romance with a drummer played by Johnny Simmons, though she seems a lot more interested in her business dealings than any love interest. Simmons is playing a character named Shane, but is Shane from Girlboss based on a real person?

The real Sophia Amoruso was married to a musician named Joel Jarek DeGraff, though they have since divorced. It doesn't appear to be officially confirmed that Shane is based on DeGraff, but the fact that both the real man and the fictional character have musical leanings could indicate that there was some real life inspiration for Shane. However, that doesn't necessarily mean Shane has any connection to DeGraff; Shane could be an amalgamation of a few people Amoruso knew, or he could be wholly original. The fact that they're both musicians might be a total coincidence.

Amoruso and DeGraff married in 2015 and divorced in August 2016, after Girlboss had been ordered to series. It might be possible Shane was originally conceived as a nod to DeGraff considering they were still married at the time, but once again: nothing confirmed.

Amoruso first met DeGraff in 2002 in Olympia, Washington — long before her internet business took off. They didn't get together immediately, though they stayed in touch. In an interview with Martha Stewart Weddings, Amoruso said that she and DeGraff wrote to each other and traded mixtapes for almost a decade while he was working on his music and she was building her brand. They eventually crossed paths in person once again and got together officially, becoming engaged three years later. The details of their relationship do seem to imply that the character Shane might be partially inspired by DeGraff, though he wasn't present during the time Amoruso started Nasty Gal, as Shane seems to be.

DeGraff's current musical venture is a project called Same Animal that, according to his official website, "stitches together original songs that blend the inner bleedings of their creator, Joel Jarek DeGraff, with familiar sounds found within unfamiliar landscapes." Same Animal records with other artists like Jesse Tobias and Fredo Ortiz; the music can be heard on Soundcloud.

Girlboss interprets the events of Amoruso' life to tell the story it wants to tell. Not everything about it is wholly factual, though there are kernels of truth sprinkled throughout.