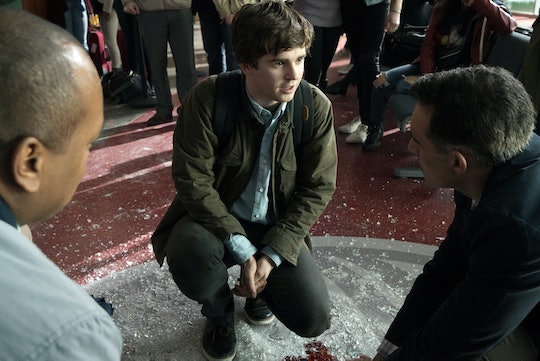 The Good Doctor is an upcoming ABC series that follows Dr. Shaun Murphy, a young surgeon who specializes in pediatrics. He's also autistic and has savant syndrome, which makes some people at his hospital doubt his ability to perform at his job. But is the story inspired by actual events? Is Shaun Murphy from The Good Doctor based on a real person? The story does sound like something that could be realistic, even though there's no way to tell how sensitively it addresses its themes until its Sept. 25 premiere.

Shaun Murphy isn't based on a real person, but The Good Doctor was inspired by another source. In this instance, however, none of the inspiration came from real life. The show is an adaptation of a Korean drama of the same name, but neither the remake nor the original show based Shaun on an actual doctor. While there is no real life Shaun out there, executive producer David Shore explained to Deadline that they wanted to be realistic about many aspects of the show, including Shaun's diagnosis. However, that doesn't mean Shaun is meant to stand for all people with autism.

"We saw a lot of doctors, we consulted with people, we've got people on the spectrum who we're working with," Shore told the site. "But [Shaun] is a specific character, he's not there to represent autism, he's there to represent Dr. Shaun Murphy."

Series star Freddie Highmore hoped that Shaun would resonate with audiences instead, telling TVLine, "It would be impossible... and a somewhat rude thing to say that this character will represent [all autistic people]. Hopefully, he will speak to everyone with differences... he's not solely defined by his autism." Shaun's autism, as described by Shore in the same interview with TVLine, primarily poses a challenge with his communication skills.

To The Hollywood Reporter, executive producer Daniel Dae Kim explained that the challenges Shaun faces (and his dedication to overcoming them) were integral to the character and the show. "The primary thing that made me really want to pursue this show and bring it to American audiences is the fact that the character of Shaun is someone who was born with a set of obstacles — the obstacles were not put in his own way by his own choices," Kim said.

"And in so many dramas that we see today, we see people getting in their own way," he continued. "But Shaun is not one of those people. Shaun is trying to overcome his challenges in a way that I wholeheartedly root for. And that is a really positive message that I think is particularly resonant given these political times."

Despite the fact that The Good Doctor is already based on another show, many have noted potential similarities between Shaun and House's Dr. Gregory House, especially since Shore worked on both shows. Both Shaun and House have vast medical knowledge and difficulties with communicating that information to others. However, the similarities stop there. House was not autistic nor did he canonically have savant syndrome, so the characters don't have as much in common as it might seem at first glance. Shaun will also lack House's cynicism, instead tackling his many cases with what Shore described to USA Today as "an innocent, non-judgmental point of view." Shore may be involved in both shows, but they promise to be different variations on a similar theme.

Though he may be easy to compare to other characters, Dr. Shaun Murphy is an original character all his own, with his own journey and story to tell. Hopefully that story will be told respectfully and realistically, and Shaun will feel like a real person — even though he isn't based on anyone real.