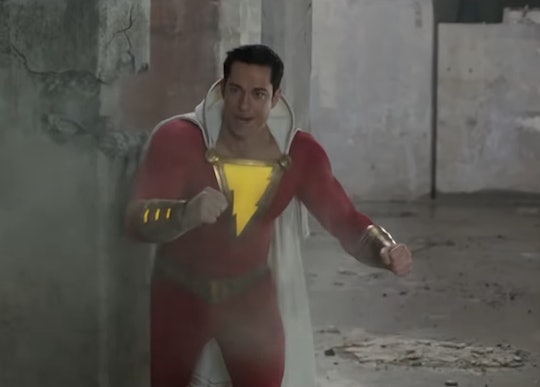 For Kids Under A Certain Age, 'Shazam!' May Not Be The Best Movie To See This Weekend

Shazam! is the latest entry into the slate of superhero-themed movies to hit theaters on Friday, April 5. With its playful marketing campaign and colorful palette, it seems like a film that would be fun for the whole family. But is Shazam! appropriate for kids under 10? Sadly, this may be one younger kiddos may want to avoid for a bit.

Shazam! seems like a movie custom-made for kids; it’s the story of a young orphan boy who is granted the ability to turn into a superhero by saying the wizard’s name, “Shazam”, according to Collider. Disney star Asher Angel was cast as the young version of the main character, Billy Batson, while Zachary Levi was cast as the adult, superhero version, according to the film’s IMDb listing.

Much of the movie seems to rely on Levi’s charm and charisma, in the style of Tom Hanks in Big. Here is a man, playing a boy who is trapped in a man’s body. And that’s a considerable win for the movie, according to early reviews. I’ve personally seen Levi in action at small events on a few occasions and he does ooze boyish enthusiasm.

“The optical illusion allows Levi to be tall, dark, and awkward, instead of, say, a ripoff of Chris Evans’s dashing and swoon-worthy Captain America," Vox explains in its review. "The goofiness grounds the hero in comedy. Superhuman feats, like being faster than a speeding bullet and more powerful than a locomotive, are cartoonish without the proper training, and Levi is more than game to lend himself to the physical humor of being shot in the face for the sake of giggles."

All that is easily on display in the trailer.

But the childlike nature of the superhero doesn’t extend to the entire movie. Shazam! was granted a PG-13 rating by the MPAA, according to IMDb, and Common Sense Media warns about action violence, swearing, and serious themes.

For a very mature 10-year-old who’s seen a lot of superhero films, this might be OK, and obviously up to their parent's discretion. But any younger might be pushing the envelope. With this movie, it sounds like it'd be better to wait a couple years and enjoy it together when they're older.

Entertainment Weekly compared Shazam! to the best moments of the Spider-Man movies, when Peter Parker was surprised by and enjoying his newfound abilities. But those moments of youthful exuberance aren’t enough to sustain an entire superhero film, as Entertainment Weekly noted, so Shazam! does have to veer into the well-trod territory of a super-villain and a need to save the world.

Those moments may bog things down a little, but the overall effect still looks like a rollicking good time.

In a recently released clip from Warner Bros., fans can watch the moment when Billy Batson returns home as his superhero-self, accompanied by his very excited foster brother. In the clip, they encounter their foster sister, who they have to convince not to tell anything about what she’s seen.

The clip is a nice example of what is likely the overall tone of the film, but remember there will be some danger and action thrown in throughout. So, perhaps it's best to plan your kids' viewing of Shazam! according to their exposure to similar content