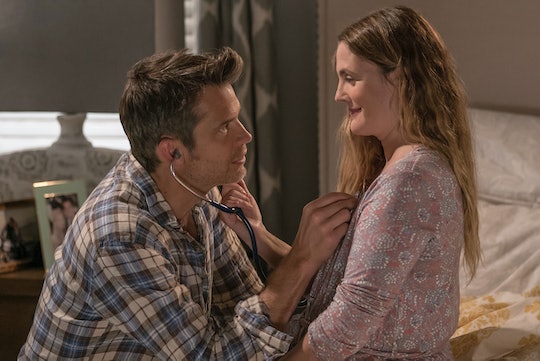 Netflix's new comedy series, Santa Clarita Diet, is a bit strange. The show follows the Hammonds, a typical family living in Santa Clarita, California. Sheila (played by Drew Barrymore) and Joel (played by Timothy Olyphant) are a married real estate agent team, while their daughter Abby (played by Liv Hewson) is a teen in high school. There's only one catch. Sheila likes to eat people. (I know, NBD right?) So is Sheila really dead on Santa Clarita Diet or did something else happen to her to make her appetite change?

When Barrymore and Olyphant appeared on The TODAY Show, it was stated that a mysterious illness led to Sheila becoming undead. That's the only hint that's been given about Sheila's now zombie state of life and it's unclear if it will remain a mystery on the show or if an explanation will be given. Whatever the reasoning is, Sheila is definitely dead, just not "in the ground" dead. Instead, she's still moving around and living her life as if she were actually alive. In the trailer, Joel is seen talking to a medical professional about his wife's new state of... death. So maybe he'll get some answers there. What's most interesting though, is in the trailer it appears Sheila doesn't even realize she died until she notices her heart is no longer beating.

Similarly, it's not until Abby's friend confirms it do they truly realize she's actually no longer part of the living, which is strange. How did no one notice Sheila died? My guess is the "mysterious illness" killed Sheila in her sleep and she woke up undead, not even realizing she'd died at all. A big question I have is will the illness be contagious? Based on what I've seen of the show so far, it looks like Sheila is the only undead person around. But why did it happen just to her and not other people? Why did she become undead instead of just dying? This series already has me asking so many questions and I'm only just getting started.

Besides the mystery of the show, the dark comedy is said to be like a family sitcom, just with blood, guts, and murder. So if that's your type of thing, you may want to give Santa Clarita Diet a try. The new series begins streaming on Netflix on Friday, Feb. 3.