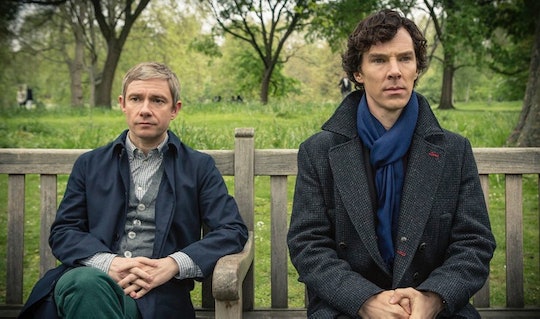 'Sherlock's End Could Be Fast Approaching

Sherlock returns for a fourth season after its longest hiatus yet, and the U.S. premiere is just around the corner. The new season, which comes three full years after Season 3 ended back in 2014, will premiere on Jan. 1, 2017 for its customary three-part installment. While the show typically only goes two years between seasons (which is cruel enough), the extra long lag time this go around presumably has something to do with its stars' rising fame and an increase in their other projects. It has some fans are wondering: is Sherlock ending after Season 4?

Since we've last seen Benedict Cumberbatch in the classic titular role with Martin Freeman as his not-so-faithful sidekick Watson, Cumberbatch has tackled Marvel's Doctor Strange and Freeman had an Emmy-nominated turn on FX's Fargo reboot. But what really got fans talking about whether this will be Sherlock's final season was an interview Cumberbatch did with British GQ for its November cover. When asked about the show's fate, he cryptically said, "It might be the end of an era. It feels like the end of an era, to be honest."

He went on to explain that Season 4 was made "very complete as it is," so there wouldn't be a need to continue, but that "the idea of never playing [Sherlock] again is really galling."

Just this week, however, showrunner Steven Moffat not only backpedaled on what Cumberbatch had to say, but he also went so far as to insist he had been misquoted. In an interview with Entertainment Weekly that shows just how frazzling constant fan speculation about the show is, Moffat commented:

This is really worth saying because it’s getting exhausting for us all. That’s not what Benedict said. That’s what someone edited his words into the meaning of. It seems to be impossible these days not to be misquoted. He was quite specific about being keen to carry on. He went on to say he’s hard to get us all together. We want to keep the quality up. We haven’t even seen this [season air] yet. We don’t know. We haven’t sat down with the intent to anything yet. But we’re always aware that it could be over. But the fact is Benedict did not say that.

Meanwhile (yes, this is as fraught as a real-life Sherlock episode), Martin Freeman was doing a radio interview about the show's potential ending, in which he hinted:

Life does sometimes have a way of telling you, "This is probably it now." This last [season] did have a feeling of — I don’t know whether it has a finality to it — but it certainly had a feeling of a pause. It definitely had a feeling of that. And I am never ever afraid of things ending. I mean I am not looking forward to life ending or love ending, but things that we make should end.

Could it be that the stars are itching to move on to bigger and better things? Is Steven Moffat clinging to something everyone else feels ready to move on from? Is it just too hard to get everyone in the same place at the same time to keep making these? Will no one think of how inhumane it is to make fans wait literal years between seasons? Since it seems like no one is willing to answer these questions definitively, we'll have to use our powers of deduction to suss out the truth.