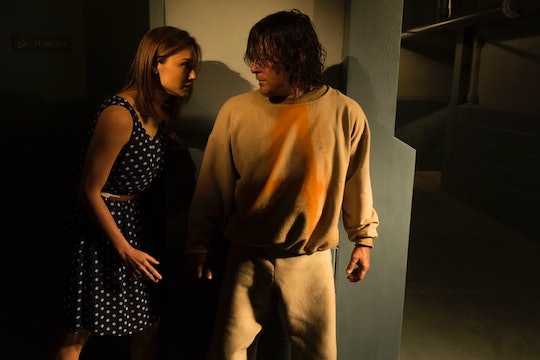 Sherry Makes A Bold Move On 'The Walking Dead'

Many fans probably already had a sneaking suspicion that Sherry was the one who had let Daryl out of his cell back at the Sanctuary, but now that Sunday night's episode confirmed as much, she's now in more danger than ever. Knowing that the blame would eventually lead back to her, Sherry decided to disappear in an attempt to make it on her own. She explained all this to Dwight in a letter and even admitted that she's unsure of her survival odds. So is Sherry dead on The Walking Dead? That's certainly the story Dwight has told Negan, though that's mostly for her own protection.

You see, even though Sherry didn't offer to bring Dwight with her (since she wasn't sure if he'd come with her or not), he still loves his wife very deeply and is willing to do whatever it takes to ensure her safety. Dwight blamed Daryl's release on the Sanctuary's unsuspecting doctor and explained Sherry's disappearance as being out of fear rather than guilt. Dwight also revealed that Sherry had run away from him and landed herself straight into a pack of Walkers where she was inevitably killed. But, as the audience, we know this wasn't really what happened. Dwight never found Sherry. She was long gone by the time he read her letter. So that begs the question: where is she now?

If you'd prefer to turn to The Walking Dead comics for answers, then just know that the story plays out a little differently than the direction it appears to be going in. In the comics, Sherry never runs away, but becomes somewhat of an antagonist during the upcoming war between Alexandria and the Saviors. In fact, shortly after Rick and the others defeat Negan and take him hostage, Sherry leaves Dwight for someone else and appears to serve as the Sanctuary's new leader.

Granted, it's difficult to say if things will end up playing out this way, given that she's no longer a member of the Saviors and seems to be a genuinely nice person. She even explained to Dwight how sorry she was that he was no longer the nice person she fell in love with and how she blamed herself for that happening. (It was, after all, her idea to marry Negan as a way of saving Dwight's life.) So it seems unlikely that she'll eventually pose a big threat to Rick & Co. or ever return to the Sanctuary at all. Then again, you can never be too sure with this show, so I suppose anything is possible.

But for now, just know that Sherry is out there, trying her best to survive solo. Maybe she'll eventually run into Daryl and join forces with them in helping to bring Negan down. I'd love to see her play a bigger part in all of this. So until we see her dead body lying around somewhere, I'm going to be optimistic and assume the series isn't done with her just yet.