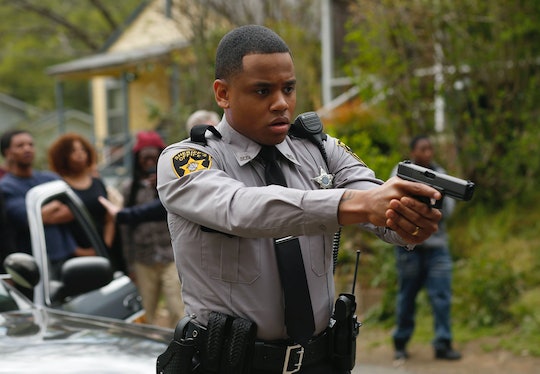 FOX has a highly anticipated "event series" in the pipeline called Shots Fired and the new drama premieres on Wednesday, March 22 alongside Empire's midseason return. The 10-episode series, which comes with a possibility for more future seasons, seems to be a response to the surging popularity of ABC's anthology series American Crime. Shots Fired also comes from black creators and tackles issues of institutionalized racism, police brutality, and racial tension in America. But is Shots Fired based on a true story? The storyline is extremely familiar, which gives it a ripped-from-the-headlines feel, but with one important distinction that may wind up muddling its impact.

Shots Fired tells the story of a black police officer named Joshua Beck who "racially profiles" a white college student driving around a black neighborhood. Joshua assumes the white man is in the neighborhood buying drugs and pulls him over. In the ensuing altercation, Joshua shoots and kills him. The town erupts and special investigators are sent to launch an investigation into the police department, because "no one wants another Ferguson." Of course, there's one glaring difference between this case and Ferguson, and it's that the cop is black, the victim is white, and this instance of police brutality is missing the fundamental DNA of the Ferguson shooting and all like it, which is that the victims were black.

A character in the trailer attempts to address this, displaying understandable skepticism that this particular shooting was the one the government decided to investigate, and, as the story unfolds, it comes out that another shooting of a black teen by a white officer was covered up by the police department. The way Joshua is targeted by a public investigation and ultimately abandoned and condemned by the police force, unlike white officers in his position might be, is an interesting subversion of the story that we are so used to.

Suffice to say, Shots Fired will explore an interesting way of unpacking institutionalized racism in America — hopefully with the onus on white people — as the story continues to play out over the course of the 10 episodes. Not to mention it will open up a dialogue on an important topic matter that needs to be discussed. The series is made up of an all-star cast, which includes the likes of Richard Dreyfuss, Helen Hunt, Sanaa Lathan, and Stephen Moyer, just to name a few.