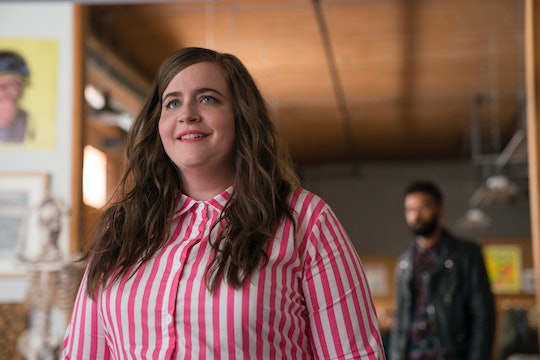 The six-episode first season of Shrill just dropped on Hulu and whether you discovered it through its star Aidy Bryant or the significant buzz it's been generating, newcomers to the project may be wondering about the book Shrill is based on. It's modeled after Lindy West's memoir Shrill: Notes From a Loud Woman, and the essayist actually serves as a writer and executive producer on the series.

But in interviews, she's quick to dole out credit where credit is due when it comes to the source material. "First of all, it’s very fraught to make a show about your actual life and actual people," West said in an interview with Crosscut. "That’s just a way to become estranged from people. We took a lot from my real life, but also from Aidy’s life and the other writer’s lives."

Although Shrill is based on West's obviously autobiographical memoir, the series itself is a little more fictionalized. For example, Aidy's character is named Annie, not Lindy, and the show takes place in Portland, instead of in Seattle, where the memoir is set. Annie also writes for a fictional Portland alt-weekly, whereas West wrote for The Stranger in Seattle, and her boss is played by John Cameron Mitchell, inspired by Dan Savage, West's real-life editor at The Stranger.

West got her start at The Stranger, but she went on to become a staff writer for Jezebel, an op-ed writer for The Guardian, and a columnist at the New York Times. Her memoir, which draws heavily from her earlier essays, debuted in 2016. Along with Bryant, West co-wrote the Shrill pilot with Parks and Recreation alum Ali Rushfield, who also served as showrunner.

Rushfield told The Seattle Times that Bryant signing on was a big turning point in terms of developing Annie as a character and finding the places where she and West diverged. "The character we started with was more messy and didn’t pay her bills," Rushfield explained. "[Aidy] said, 'I don’t want the trope of the fat slob, I want to see a put together person,' someone who knows how to manage her life. And she’s more of a sunny personality and a positive person."

Indeed, the show has been labeled a "body-positive" one, but West believes the story and its protagonist are a lot more complicated than that. She explained in her Crosscut interview that, yes, she wrote a savvy, stylish fat character who was the hero of her own life. But oppressive forces outside of Annie still stifle her well-being, even though she loves and celebrates her body.

"We want Annie to have a cool house, cute clothes and fun life," West said. "She comes into it with personal style, a point of view and a life that doesn’t need a makeover. What needs a makeover is the world around her."

Ultimately, Shrill aims to elevate the bodies we don't normally get to see see living their best lives on television while refusing to gloss over the criticism those bodies inevitably face in their quest to take up space. The result is a heartfelt and fresh new comedy that audiences will hopefully crave more than just six episodes of.