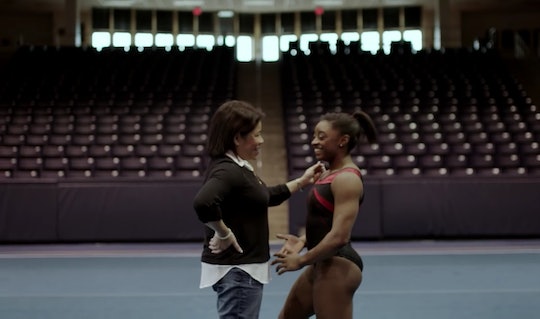 The Olympics are back, and with them, a series of heart string-tugging commercials from a massive consumer goods company. Yes, Procter & Gamble's "Thank You, Mom" ad campaign is back, featuring real Olympic athletes and their moms. Well, sometimes. While Simone Biles' mom is played by an actress in this year's main ad, "Strong," she is featured in another video for the "Raising an Olympian" series.

"Strong" focuses on the strength that mothers impart to their children. The athletes are portrayed as little kids at first, facing scary scenes like tornadoes, car accidents, and bullies. And mom is right there, encouraging them, keeping them safe. Flash forward to the real athletes preparing to compete in the Olympic games, and there's mom again, as always, urging her child to be brave. Shut up, I'm not crying; you're crying! But the mom that pulls little Simone into a storm shelter, and later embraces her as the world applauds, isn't her actual mother. Does that ruin the magic a little? Maybe. But Nellie Biles does get her due in another Procter & Gamble spot for Tide Pods, where she talks about how she taught her daughter to make good choices, and how that led to her competing in the Olympic games.

The true story of Simone and Nellie Biles might make fans reach for the tissues, too. According to Texas Monthly, Simone was born to a mother with an addiction problem, and her father was never in the picture. She and her siblings bounced around foster homes until she was 6, when her maternal grandfather, Ron, and his wife, Nellie, adopted Simone and her younger sister, Adria (Ron's sister adopted their two older siblings). Eventually, the girls swapped out "Grandma" and "Grandpa" for "Mom" and "Dad." Simone also refers to her coach, Aimee Boorman, as her "second mom." She occasionally speaks to her biological mother, Shanon, over the phone, but has only seen her a few times since her adoption, and Simone says she feels "like another cousin."

Simone actually got a late start in gymnastics; during a daycare field trip to a gym at age 6, the coaches noticed her imitating the gymnasts and sent her home with a letter encouraging her parents to sign her up for classes. "Gymnastics was not a sport that came to mind that I would have put Simone in in the first place," Nellie told Us Weekly. "That just came by as an accident, and it was a great accident." Now, thanks in no small part to Nellie's encouragement, Simone is officially the greatest gymnast in the world.