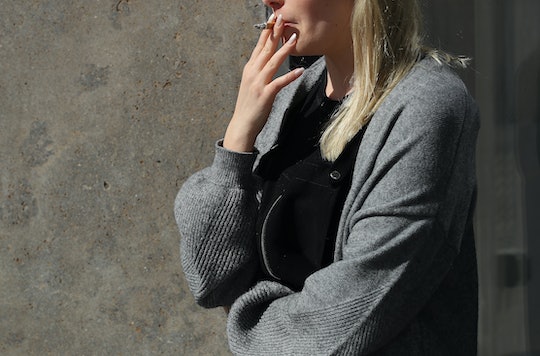 While smoking seems to be a thing of the past in terms of our increasingly health conscious society, many Americans still light up everyday. And while it's pretty much common knowledge that no one should smoke around pregnant mothers, it still happens. This creates a laundry list of potential health problems for both mother and baby and the findings of one study shows just how dangerous secondhand smoke can be. So, is smoking around pregnant women dangerous? New research says it could affect a fetus' vital organs.

Fathers-to-be — other family members, friends, coworkers, and others who smoke around expectant mothers — can unknowingly harm a growing fetus and putting it at risk for heart defects, according to a recent study published in the European Journal of Preventive Cardiology.

Researchers in China took a hard look at 125 studies that included a total of nearly 9 million prospective parents and more than 137,000 infants who's hearts had formed incorrectly in utero, according to HealthDay.

When compared to non-smoking parents, the increase in birth defects was 124 percent for women exposed to secondhand smoke while pregnant, the study explained. And it didn't matter when the expectant mother was exposed to smoke — it proved to be dangerous during all nine months.

It also increased their baby's risk of sudden unexplained infant death syndrome, according to a report from Seattle's Children's Hospital, as another Consumer Affairs article noted.

Even fathers who didn't expose mothers to secondhand smoke, but still smoked raised the chances of heart defects by 75 percent. A father's smoking habits could also be a contribution to attention deficit disorder in children later on in life, according to Consumer Affairs.

"Fathers are a large source of secondhand smoke for pregnant women, which appears to be even more harmful to unborn children than women smoking themselves," study author Jiabi Qin of Central South University in Changsha, China said, according to HealthDay. "Fathers-to-be should quit smoking."

Nearly one in 100 babies are born with heart defects every year, according to The March of Dimes. Heart defects include problems with the septum (the wall that splits the heart into two parts), the valves, or the veins and arteries. This can affect the direction and amount of blood flow the heart delivers.

More than 34 million Americans smoke cigarettes and while the number is down from previous years, it's still a significant number, according to CNBC. But if you include e-cigarette and other forms of tobacco ingestion, that number grows to 47 million people.

"Smoking is teratogenic, meaning it can cause developmental malformations," said Dr. Qin, per Consumer Affairs. "The association between prospective parents smoking and the risk of congenital heart defects has attracted more and more attention with the increasing number of smokers of childbearing age."

Bottom line, research has found smoking to be dangerous for a growing family. And while there isn't much research in place on the affects of vaping, one might want to steer clear of this too. Better safe than sorry when it comes to the health of a baby.