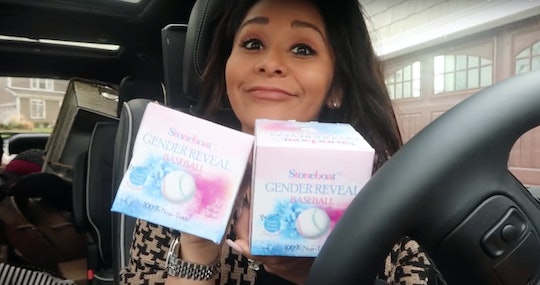 Christmas has arrived early for Nicole "Snooki" Polizzi. That's because the Jersey Shore star found out the sex of her baby on Thursday, an incredibly exciting and special moment for her family. So, is Snooki having a boy or a girl?

In a YouTube vlog posted on Thursday, Dec. 13, the mom-to-be revealed she and husband Jionni LaValle are expecting a baby boy! Snooki has been open about her desire for another boy, so it's an especially happy day in the Polizzi-Lavelle household. "I want two more so I think we're going to try sooner than later," Snooki told E! News in February 2017. "I'd like two more boys if that could happen. I don't want another [daughter.] She's too much!"

As for how Snooki revealed the sweet news? She had her 6-year-old son, Lorenzo, hit a baseball filled with colored powder. The reality star invited close friends and family to watch the special moment, which was both exciting and stressful for Lorenzo.

“Go Lorenzo, you got this, honey! Big brother!” Snooki told Lorenzo moments before he hit the ball, according to People. Aww.

Snooki and LaVelle already knew the baby's sex before the reveal, but they wanted Lorenzo and Giovanna, 3, to experience the moment for themselves. Talk about a pair of thoughtful and awesome parents.

Once Lorenzo smacked the ball open, an explosion of blue powder covered the family's front lawn.

“It’s a boy!” Snooki's guests cheered after the sex was revealed.

Another fan chimed in: "I knew it! I knew it! I had a feeling, even before you even hit it I knew it!! Great Job Lorenzo! #Baby BOY!!﻿"

Others commended Lorenzo (rightfully so, btw) for his batting skills.

"Wow! Im just shocked at how good lorenzo is at hitting a baseball lol﻿," someone said.

"I knew it!! And wow he’s good at baseball snooks!!" a fan penned. "Congratulations﻿."

Where it concerns Snooki's Jersey Shore cast mates, pregnant Deena Cortese is probably jumping up and down for joy at the moment.

"We’re hoping both are the same gender so they’ll be best friends — and if not, maybe they’ll date!” Cortese gushed to Life & Style magazine before the reveal.

Of course, girls and boys can be BFFs, too. I understand what Cortese is trying to say, though.

Snooki and LaValle are set to welcome their little meatball in June, according to Us Weekly. It's safe to say the mom's kiddos are thrilled for their baby brother's arrival, especially since Christmas is right around the corner.

“Santa, can you bring bath bombs for the new baby? 😩🙏🏽🎄#blessed #myworld🌎," Snooki captioned an Instagram shot of her kids posing with Ol' Saint Nick.

These kiddos are too cute. And I love how they're already into self-care, as evidenced by the whole bath bombs thing.

Congrats to Snooki and her family on the impending arrival of their little guy. You guys deserve all of the happiness in the world.

More Like This
Nick Cannon Has A Lot Of Babies. We Have A Lot Of Questions.
Kate Middleton's First Tiara Moment As The Princess Of Wales Honored Princess Diana
Ryan Reynolds Jokes He "Should Sweep Or Something" To Get Prepped For Baby #4
Hilary Duff Cut Her Daughter Mae’s Hair & Gave Her The Most Adorable Bangs