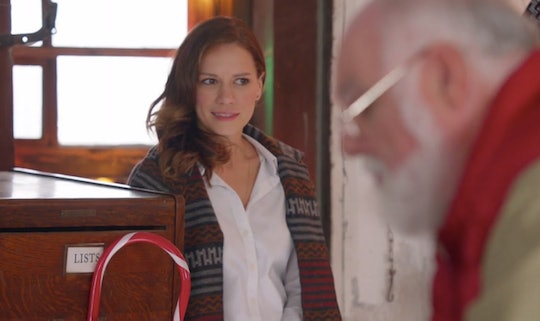 If there's one thing I recommend doing this weekend, it's curling up on the couch with cheesy holiday movies while the rest of your household is out getting their Last Jedi on at the movie theater. They're just too good to miss, really. While you're getting your presents wrapped in bliss, you might find yourself wondering if Lifetime's Snowed-Inn Christmas is based on a true story or not, since the plot is one that totally *could* have happened.

Alas, the movie is not based on a true story, but the setting of the movie, Santa Claus, Indiana is 100 percent real, so at least there's that. But the movie begins in New York City, at a digital media company, where a woman named Jenna (played by Bethany Joy Lenz) and Kevin (played by Andrew Walker) are sworn enemies.

Walker, who does a lot of movies for the Hallmark channel, too, told TV Goodness of the movie:

We get grounded in Santa Claus, Indiana and have to stay there together at the Inn. I’m a huge Christmas skeptic and she loves Christmas. We figure out each other’s flaws and begin enjoying each other’s company and [we] have to save the inn. I’m happy to switch it up a little bit and do one with Lifetime.

The only thing that they have in common is that they both aren't into their holiday plans, so they volunteer for a special writing assignment to cover something in Colorado. Predictably, if you're a Lifetime movie fan, a huge snow storm causes their plane to make an emergency landing in the sleepy town of Santa Claus, Indiana, where they get involved in the town's fight to save the historic town inn run by Carol and Christopher Winters.

Believe me, I wanted this couple to be based on IRL people and the inn to be one of Santa Claus' main tourist attractions, but it's all made up. One thing though, is very, very real. Santa Claus, Indiana is a real place you can visit with your family, which is pretty hilarious. During the rest of the year, it's just a normal town, but come December it turns into a magical wonderland.

There are festivals all season, light shows, and you can even visit the local post office to send out your Christmas cards. Every year, there's a new Santa-themed postmark that they offer from Dec. 1 until Dec. 23. And get this? You don't even have to go to Indiana to get it. According to the town's website:

You can also mail your Christmas cards to the post office and request the Santa Claus Postmark. Just put your cards in a package (sturdy envelope or box), with postage stamps already on them, and mail to: Postmaster, Santa Claus Station, Santa Claus, IN 47579-9998. Include a note requesting the postmark and you will be set.

And it's totally free, which is sort of a Christmas miracle, if you're into that sort of thing.

So, it might not be totally realistic that two online writers are sent across the country on a holiday, end up in what can only be called the American "North Pole," save a historic inn, and then fall in love. But at least the film's writers didn't make everything up. Santa Claus, Indiana might be the best kept holiday secret out there.

Leave it to a Lifetime movie to make you waste an entire weekend on sappy holiday rom-coms and learn useful information about the postal service.