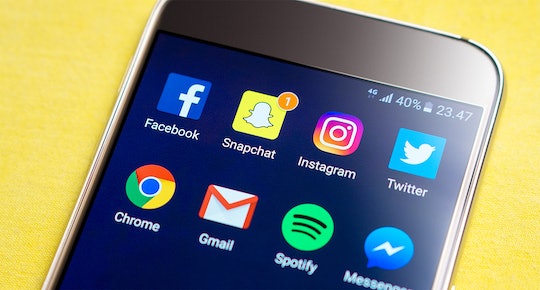 Last week, it was reported 11-year-old Tysen Benz hanged himself in a suicide attempt on March 14 after his 13-year-old girlfriend allegedly faked her own death on social media. Benz died of his injuries last Tuesday in Ann Arbor, Michigan. Benz's mother, Katrina Goss, spoke to CBS News and alleged that it was a "social media prank" that caused him to take his own life, but is social media responsible for Tysen Benz's death? It's not a simple question to answer, given that as with so many suicides, there are more questions than answers. But Goss's reaction is understandable when a mother has lost her 11-year-old son to such tragic circumstances. Goss did not immediately respond to Romper's request for comment.

According to police reports, Benz's girlfriend, who has not been identified because she is a minor, allegedly faked her own suicide on social media. "She had pranked her own death," Goss told the Associated Press. "I don't know what possessed her to do such a weird prank. It's a twisted, sick joke." After seeing her posts on social media, Benz then hanged himself in his Marquette, Michigan home. According to Goss, "The whole thing happened in about 40 minutes. He was fine and then I found him."

Goss's grief is apparent in her statements to CBS News, as she claimed how social media played a critical role in her son's death:

She [Benz's girlfriend] told him she was going to kill herself and used other friends’ social media accounts to put forth further fake proof that she did so. He even said he was going to kill himself and she didn’t make any attempt to call me or someone else to try to stop him. [His death] should never have happened.

Please monitor all of your children’s technological device usage. It is not an invasion of privacy. It is imperative to know what they are doing and to whom they are socializing with.

But just as you can't sue gun manufacturers for shootings, or sue a car marker for a drunk-driving accident, social media can't necessarily be held entirely to blame. Someone had to pull the trigger. Someone had to be behind the wheel. In Benz's case, someone was at the keyboard. While social media may not have been the direct cause of Benz's death, it was still very much a contributing factor. The Marquette County prosecutor's office has charged Benz's girlfriend with "telecommunication services-malicious use and using a computer to commit a crime," according to a statement.

Such a charge is not unprecedented: In 2016, the Massachusetts Supreme Judicial Court ruled teenager Michelle Carter must stand trial for her role in the 2014 death of Conrad Roy, who committed suicide by carbon monoxide poisoning in his truck. Carter allegedly encouraged Roy to take his own life via numerous text messages; Carter has been charged with involuntary manslaughter as a "youthful offender" and faces trial in June. Lawyers for Carter did not immediately return Romper's request for comment.

Benz's suicide and the tragedy that surrounds it serve as a sobering reminder about the the destructive culture of pranking — and how the ubiquity of social media fuels that culture. Goss's plea that parents should monitor their children's social media usage is not unheard: It's even recommended by numerous children's advocacy groups such as Common Sense Media. Social media has heard the call, too: There's a "dealing with self-harm and suicide" support page on Twitter. Earlier last month, Facebook introduced suicide prevention tools to its Facebook Live and Messenger services using AI to identify suicidal users.

Even so, for all the reporting and abuse tools that social media platforms can provide to minor-aged users and their parents or guardians, those tools can't stop decisions being made by real people in real time. There are numerous examples each as tragic, confounding, and desperate as what happened to Tysen Benz: the 24-year-old Indian student who broadcasted his last moments to Facebook Live last week before jumping out a 19-story window; the alleged gang rape of a 15-year-old girl broadcast on Facebook Live and viewed by more than 40 people last month; or the 2011 suicide of Ashley Billasano, an 18 year old from Texas who posted 144 tweets with suicidal ideation and threats over a span of six hours before suffocating herself.

Blaming social media won't bring back 11-year-old Tysen Benz, but talking about the role social media plays in cyber bullying and pranking is important, especially now that parents must grapple with the emerging and sobering consequences of their children using social media.