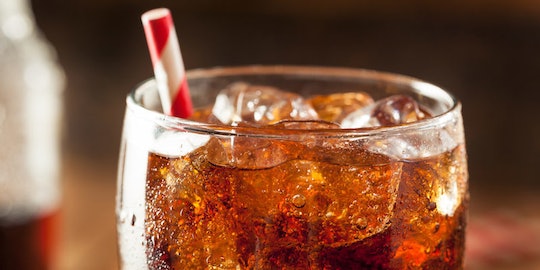 Though many enjoy their favorite sugar-filled, carbonated beverages from time to time, the truth is that processed, sugary drinks may pose a health risk, and it may be more significant than we previously thought. In light of new research that suggests even small amounts of your favorite fizzy or sweet drink may be linked to an increased risk of cancer, some may be wondering exactly how bad soda is for you.

Published yesterday by the British Medical Journal, researchers behind the new study followed 101,257 adults for five years. The researchers concluded that there was a correlation between drinking a small glass of a sugary drink per day — roughly 100 milliliters, which is about a third of a typical can of soda, as CNN noted — and an increase of overall cancer risk by 18 percent, specifically breast cancer by 22 percent.

For the study, researchers defined "sugary drinks" as having more than 5 percent sugar, which included sodas, energy drinks, fruit juice (with and without added sugar), as well as coffee and teas that had added sugar, according to the BBC. Researchers also looked at the effects of artificially sweetened drinks, but found that consumption of these types of beverages were "not associated with the risk of cancer."

This study's recent findings follow another study published earlier this year by the American Heart Association and American Stroke Association that found drinking two or more artificially sweetened beverages per day was correlated with an increased risk of clot-based strokes, heart attacks, and early death in women over 50, according to CNN.

The reason why these drinks are associated with such health outcomes is still up for interpretation, and researchers and health experts have noted that more studies on the subject need to be done. "These results need replication in other large scale prospective studies," the newest study's conclusion noted.

And others agree. As Katie Patrick, a health information officer of charity Cancer Research UK who was not involved in the study, told Newsweek: "Previous research has shown a link between drinks high in sugar and excess weight — a proven cause of cancer — and interestingly these new findings suggest that sugary drinks and cancer could also be linked regardless of weight. But we need more evidence to back up this up, and to explain how it might happen before jumping to any conclusions."

As for whether or not soda is really bad for you, the research seems to speak for itself. Some experts argue that a big part of the problem is the regularity with which these drinks are consumed. “According to the USDA, 16 percent of calories in the typical American’s diet come from refined sugars and half of those calories come from beverages with added sugar,” Michael Jacobson, the director of the Center for Science in the Public Interest told WebMd.com. “Sodas used to be an occasional treat, but now they are part of the culture.”

Soda and sugary drink consumption has also been linked to childhood obesity. According to a report by HealthDay, for kids who consume multiple sodas each day, it's possible to be adding thousands of "empty calories" to their diet every single day. This may lead to other health concerns sugary drinks can pose. As Natalie D. Muth from the American Academy Pediatrics shared in March 2019 policy statement, "As a pediatrician, I am concerned that these sweetened drinks pose real — and preventable — risks to our children's health, including tooth decay, diabetes, obesity and heart disease."

While making choices regarding your and your children's health and wellness, what matters most is that you do what's right for you. At minimum, it's important to at least be aware of the research that's being conducted, today and as more information becomes available as the years go on.