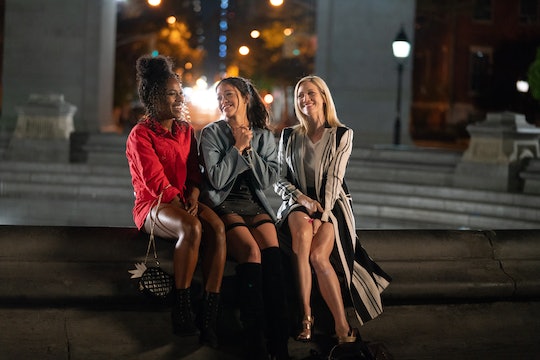 Gina Rodriguez Gets Her Groove Back In Netflix's 'Someone Great'

If you've been waiting for the next great breakup rom-com, thank your Netflix stars because Christmas is coming early in the form of Someone Great. Gina Rodriguez leads the cast as an aspiring music journalist with Brittany Snow and DeWanda Wise as her BFFs and Lakeith Stanfield as the dude who becomes the catalyst of the plot. This is one you can't miss. With such realistic elements, it might feel like Someone Great is based on a true story — so is it?

More Like This
What To Stream Right Now For Kids Who Love History
Everything There Is To Know About The Friends Reunion
The Great-Granddaughter Of Alice In Wonderland Is Getting Her Own Show
Peppa Pig Is Going Camping In A New Live Show & You’re Invited!

While it's true there are plenty of romantic comedies inspired by true events, Someone Great isn't one of them. The Netflix original follows Jenny (Rodriguez) after the breakup of a nine-year relationship. According to the official Netflix synopsis of Someone Great, Jenny and her boyfriend break up when she gets her dream job at a magazine on the other side of the country. Heartbroken, she and her two besties decide to have one last blow out in New York City before she starts her new life.

The description implies that Someone Great is less about Jenny's ex-boyfriend (or even a possible new boyfriend) than it is about her discovering the real difference between life in your 20s and life in your 30s. So maybe this isn't so much a rom-com as it is a rom-with-oneself-com. Is that a thing? It is now.

Also important to the plot are Jenny's two female best friends with whom she spends her last night in NYC. In its essence, Someone Great celebrates the beauty of female friendships in the wake of difficult times and this is the most relatable tagline of all-time, TBH.

In an interview with Refinery 29, Robinson said of her feature directorial debut, "I really wanted to make a romantic movie, about a woman who is able to come out the other side of her relationship and be her own white knight, rather than [have it be about] the promise of another man being there," she explained. "It’s really about a sisterhood and how much love and support is there. It's [that friendship that ultimately gives] Gina’s character the strength to feel okay with choosing herself."

Someone Great should give you all the same warm and fuzzies as your favorite feel-good movies like To All the Boys I've Loved Before — just with more girl power. The film is also co-produced by Paul Feig who you might recognize thanks to Kristin Wiig and Maya Rudolph in Bridesmaids. So this is basically guaranteed to make you simultaneously sob and erupt in laughter (which is a very good thing in a rom-com).

If you're only into movies based on true stories, sorry — you're out of luck with this one. But that won't make it any less relatable. And anyway, with Gina Rodriguez — nominated for multiple Golden Globes for Jane the Virgin — in the leading role, how could this not be a winner? Personally, I'm totally here for it (but stocking up on the tissues, just in case).