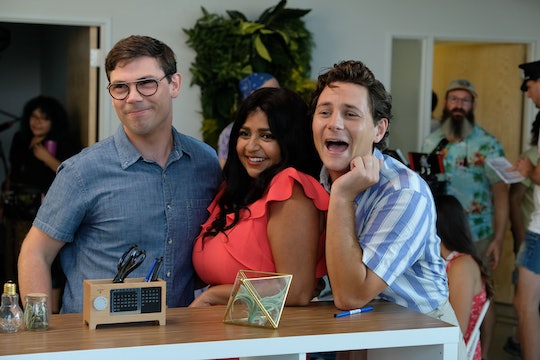 In case you aren't aware, tons of your favorite shows and movies are actually adaptations of popular books. Netflix is just one of the many networks who feature originals based on books, and most of them are so seamless you'd never know an author first penned the story — unless you've already heard of the book. With their latest sensation about to hit the airwaves, you'll soon wonder if Special is based on a book — because it's that good.

Special is based on the 2015 bestselling memoir, I'm Special and Lies We Tell Ourselves, by series creator, executive producer, and star, Ryan O'Connell. The show, which is fiction, is loosely based on O'Connell's own experiences as a gay blogger with cerebral palsy (CP) who decides to "rewrite his identity." All eight episodes of the first season are only 15 minutes of viewing time, but the show aims to normalize conversations about living as a gay man with a condition like cerebral palsy. O'Connell, who was hit by a car at age 20, spent some time denying his limp was CP-related and, instead, let others assume it came from the accident. He officially came clean through the memoir.

The memoir came about when O'Connell's candid blog posts on Thought Catalog caught the attention of a book agent, and then eventually The Big Bang Theory's Jim Parsons, who optioned the rights. The rest, as they say, is history. O'Connell not only blogged for years, but wrote for shows like MTV's Awkward, Will & Grace, and the 90210 reboot.

O'Connell told Queerty in an interview of the similarities between Ryan the character versus his real life, "I never wanted to star in Special but — and this make shock you — the world is not exactly swimming with gay 20-something actors who have mild cerebral palsy." He went on to add, "The journey Ryan goes on in Special is different than the journey I went on. I mean, the emotions and themes are autobiographical. It’s all about how hard it is to run from who you really are, especially if you have a limp. But the actual things I’m portraying didn’t always happen to me."

For example he did try to explain away his CP by saying it was a result of a car accident, while attempting to date and figure out his place in the world that sees him differently than he sees himself. Special joins the ranks as a much-needed show centering on people with disabilities who are so rarely represented on TV — like Speechless on ABC. When speaking to Time, O'Connell explained why it was important he played the leading role saying, "It needs to come from a person that’s experienced it." He added this is just his story and not meant to universally capture all experiences. "I’m excited that people are saying, ‘I’ve never seen this before', but part of me is also like, Why? We should have seen this 40 million years ago."

Before you dive right into Special, do yourself a favor and grab the book. With only 15-minute episodes, there are bound to be missed nuances in the greater context of O'Connell's life that inevitably won't make it to the script, and trust me — you want to know all you can about this one; he really is that special.