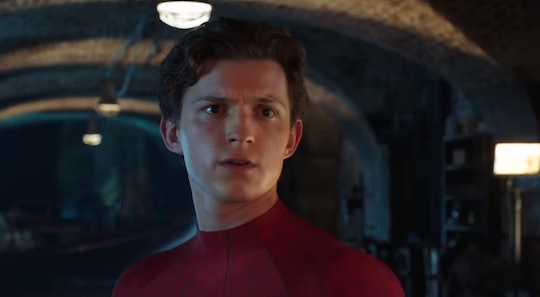 If Your Kid Wants To See The New 'Spider-Man' Movie, Here's Parents Need To Know

One of the most beloved superhero characters is about to get the big-screen treatment again when Spider-Man returns to theaters this July. Your kids are probably already asking to go see it, but is Spider-Man: Far From Home appropriate for kids under 10? It’s a pretty fine line on this one and the film's rating should be a good indicator, but there’s one good comparison that can help parents decide.

With superhero movies, it’s always a little tough to know what the right age is to expose your kids. These are, after all, stories based on comics, which are normally kids fare. But with the intense action, sometimes off-color humor, and adult themes like epic evil that can be woven through, it might be too much for some kids. A good barometer for Far From Home is actually its predecessor — did you let your child watch Spider-Man: Homecoming? If yes, how did they respond to it?

According to the movie's IMDb page, the MPAA has rated Far From Home PG-13 for sci-fi action violence, some language, and brief suggestive comments. Remember that they could have chosen to give it a PG rating if they thought it was OK for kids under 13, but they didn’t. That suggests that there are enough moments that parents might not want to expose their younger children to in order to warrant some caution. ScreenGeek noted that even in the trailer for Far From Home, Nick Fury already lets loose a curse word, so if swearing is an area of concern for you, then this might not be one you want to expose the kiddos to.

All of this is to be expected in the Spider-Man story, though, since it is about a teenager dealing with things that are well over his head, according to Common Sense Media, like balancing his superhero and teen life and having to battle "huge, dangerous creatures."

The outlet also reminded parents that superhero movies can be violent and full of destructive action, but Spider-Man films are usually some of the tamer ones. As CinemaBlend said of it: "It’s not a kiddie movie. But it’s a movie that kids can, and will, enjoy."

Whether you want your kids under 10, in particular, to enjoy it in theaters will ultimately be up to you, based on what will probably amount to a few small moments. But we all know that, for kids, those moments can make quite an impression.

With all that said, be sure to look for Spider-Man: Far From Home in theaters on Tuesday, July 2.