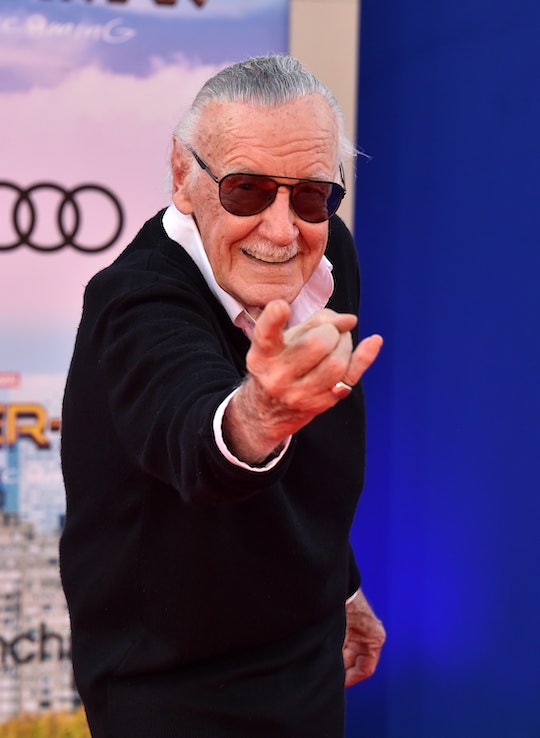 Stan Lee's Cameo In 'Avengers: End Game' Was His Last, & It Sounds Amazing

What do Iron Man, The Hulk, Captain America, and Doctor Strange all have in common? They were invented by the one and only Stan Lee — America's most beloved comic book creator and all-around Marvel legend. These super heroes are just a few of the hundreds of characters he developed over the years. While Lee was best know for his work behind the scenes, his fans know that his cameos, which he did for all Marvel Universe movies, are not to be missed. But, will Stan Lee be in Avengers: End Game? Fans are going love how the franchise honored him.

The answer is yes, you'll get to see Lee one last time in Avengers: End Game. And it's the last cameo he committed to film, according to Mashable.

Avengers: End Game picks up where Avengers: Infinity War, left off and follows the crew as they try and right the wrongs of Thano's finger snap that wiped out half the earth's population.

As for the filming of Lee's last cameo, director Joe Russo said that it was like having Santa on set.

"We have all these movie stars on that set, and when Stan came to set, everybody would be like kids again," Russo told Mashable. "It was always a lot of fun shooting these cameos because he was very charming, and he would maybe get the crew going, and everybody would be laughing and having a good time."

Since it's been confirmed that this is his last cameo, it means that Lee will be absent from the upcoming Spiderman: Far from Home, according to ComicBook.

There was a lot of excitement and commotion the day Lee came in to film for the movie.

“People you normally wouldn’t even see on the set showed up, and you’re like, ‘Where did all these hundreds of people come from?'" Trinh Tran, Executive Producer, told the LA Times. “He has that impact on all of us. Not just the fans, like the crew are his fans. We love him. We wouldn’t be here without him."

As for the scene in the movie, look for Lee in a driving sequence.

“This is a unique cameo, and he was so in it. He went for it. It was fantastic," added writer Stephen McFeely.

For fans of Lee and his iconic cameos, Marvel Studios has something special in the works — a behind the scenes video of all his cameos. And, it might be included when Avengers: End Game is available for in-home viewing, according to Entertainment Weekly. So, you won't have to wait too long.

Not surprisingly, seeing Lee on the big screen for the last time was bitter sweet for the cast and crew of Avengers: End Game.

“As much as it’s a real joyous moment, it’s obviously tinged with sadness,” Benedict Wong, who stars alongside Benedict Cumberbatch in the Doctor Strange franchises, said from the red carpet premiere of the movie. Here he shares on of this favorite memory, according to the LA Times.

“I just made a bee-line over to him and sort of fan-boyed him. I just said, ‘Stan you don’t know me — ’ and he immediately interrupted and said, ‘You’re Wong. You’re great!’ And it was a big welling-up moment.”

Lee was also in last month's Captain Marvel, and the studio replaced the opening Marvel logo with a pixelated screen of all of his cameos, according to People.

He died in November 2018 at the age of 95, according to USA Today. It's been 11 years since the first Marvel related movie premiered and Lee has been in all of them.

His first cameo dates back all the way to 1989 for the TV movie The Trial of the Incredible Hulk, reported The Insider.

Lee was an active member of the Marvel family leading up to his death, as per CNET. He was last seen in public walking the red carpet at Avengers: Infinity War.

While Lee might be physically gone from this universe, his memory will live on through his films and fans. His last cameo surely made a big impression of Marvel fanatics. And, ultimately, that's what Lee always wanted, for the fans to be happy.

More Like This
'Women Talking' Overwhelmed Me With Grief — And A Sense Of Possibility
'Women Talking' Is A Powerful New Movie Based On A Book
Marcel The Shell Is Heading To The Oscars!
Pixar’s 'Turning Red' Is Nominated For An Oscar — Here’s How To Watch It Right Now
What Parents Are Talking About — Delivered Straight To Your Inbox