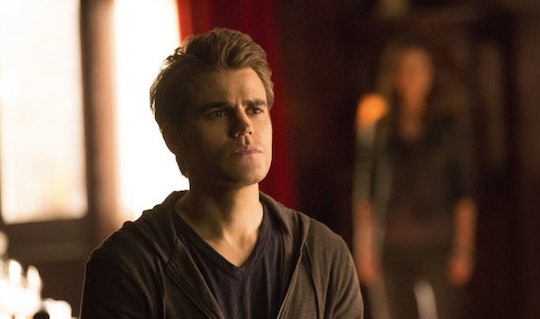 Stefan Went Through a Major Change On 'TVD'

While I'm sure many of you are still reeling from Enzo's shocking death — by Stefan's hand, no less, it's important that we don't underplay another important plot twist that happened in the final few moments of Friday night's episode. Knowing that Stefan was about to killer her, Bonnie injected Stefan with the cure she had just extracted from Elena's body as a form of self defense. So is Stefan human on The Vampire Diaries? That certainly seems to be the case.

Obviously, this is a twist that most of us never expected to see happen, but I'm very intrigued to see what this will mean for Stefan moving forward. He hasn't been human in so long. How will he adjust to this new life? Does this mean he's no longer under Cade's control? He definitely isn't as powerful or strong anymore in order to wreak havoc on humans easily since he now, in fact, is a living, breathing human himself. When the deal with Cade was initially struck, he thought he was getting a ripper to serve him, but now he simply has a mere mortal. So either that means Cade will try to kill him out of anger or let him go live with everything he's done. All of the pain he's caused, which may prove to be even worse than death.

Since he's no longer a vampire, I'm willing to bet that means Stefan's humanity switch will be turned back on, meaning he'll feel the ramifications of his actions over the past few months. The deaths. The emotional suffering of his loved ones. The ripper tendencies. And now, killing Enzo — the man who Bonnie loves most in the world.

Then there's the whole Caroline thing to factor in. Despite his most recent actions, Stefan loves Caroline and vice-versa. But now he's human and she's still a vampire, which could end up seriously complicating this relationship even more so than anything else. I mean, these two were already on shaky ground ever since he turned off his humanity switch, but now that he's no longer a member of the undead, this permanently changes their dynamic. Could this be the end of Steroline as we know it?

Right now it's way too early to know where Stefan goes from here, but you better believe it's going to be an emotional ride, not just for the characters, but for viewers as well.