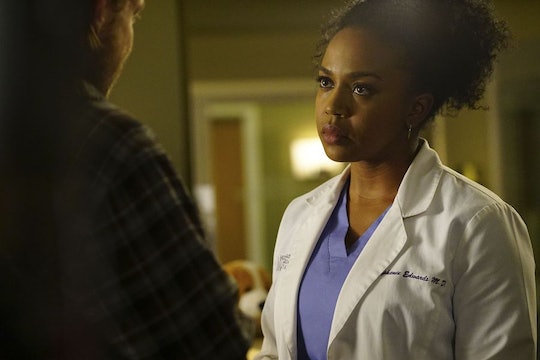 'Grey's Anatomy' Ended With A Bang... Or Rather, A Boom

Thursday night's episode of Grey's Anatomy kept fans on the edge of their seats from beginning to end. Everything came crashing down in the episode's final moments when an explosion occurred in the midst of a lockdown. Now fans are wondering is Stephanie Edwards dead on Grey's Anatomy? It's certainly not looking good for her.

After being suspended and forced to take counseling, it was a bit surprising to see Edwards back at the hospital. However, by now it should be known that nothing will keep this doctor from getting back to work. She easily finagled her way back into the hospital, but Dr. Eliza Minnick wasn't having it and set her on babysitting duty. Of course, no one knew that this job was going to be way more difficult than they expected.

The patient that Edwards was tasked with looking over had gotten into a car accident along with a woman. Both parties were half naked and the doctors were placing bets on why they would attempt to have sex in their car. Unfortunately, none of them were correct. It turned out the man was actually trying to rape the woman, but by the time she was able to explain, he'd already convinced Edwards to take him to see the victim.

Once Edwards figured out what was going on, the man already had a scalpel to her throat. He forced her to lead him through the hospital until Dr. Bailey was made aware that both Edwards and the patient, now an alleged rapist, were MIA and put the hospital on lockdown. This was a smart idea on Dr. Bailey's part, but it wasn't a great outcome for Edwards who was now locked in a corridor with not only the alleged rapist, but also an innocent little girl.

In an effort to get the doors to unlock, the man decided to start a fire and that's when Edwards decided to fight back. She poured lighter fluid all over him so that he caught on fire as well, which was admittedly a solid plan, until it backfired. In his attempt to douse the flames, the man ended up walking straight toward a gas tank. Edwards, who saw what was about to happen, told the little girl to hide back in another room before trying to stop the inevitable. Of course, she was too late and before she could stop it, the room exploded throwing her back.

It's already widely known that Jerrika Hinton, who plays Edwards, is poised to leave the show after this season. Could her death be the way her character exits the show? Fans will just have to watch the season finale next week to find out.