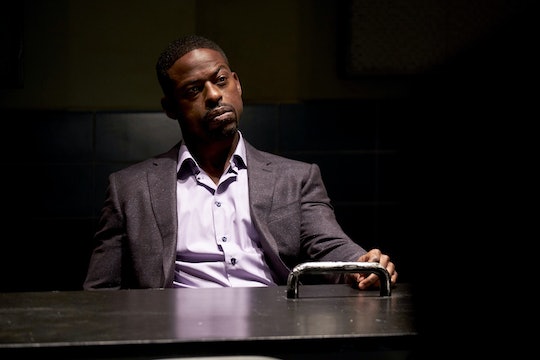 You may know him as stand-up family man and bona fide "good guy" Randall on This Is Us, but the Emmy award winning actor Sterling K. Brown is about to show off his comedy chops in a guest-starring role on the goofball comedy show Brooklyn Nine-Nine. Maybe you're wondering if Sterling K. Brown's character on Brooklyn Nine-Nine is based on a real person. Brown will play a periodontist suspected of murdering his partner on the show.

In the episode, Brown's character Philip Davidson undergoes an all-night interrogation from Andy Samberg's character, Jake and Andre Braugher's Holt in their signature style. In the clips of the episode available, it looks like Jake tries to throw a bunch of gotcha question at Davidson, who has a ready answer for everything, including an explanation for a late night phone call, and a helpful video game tip. "You were the last person to see him alive, correct?" Jake challenges the suspect. Davidson nonchalantly replies, "No, I imagine whoever killed him saw him after I did." Too slick for you, Brooklyn cops. Having never been questioned by the police, I can't say whether this style or the style of Law and Order is more true to life.

Brooklyn Nine-Nine is to dramatic police procedurals what Scrubs was to hospital shows like ER. As such, the entertainment comes more from the bumbling efforts of the cops and their goofy personalities than the drama of solving a murder. For this reason I'm inclined to believe that the show doesn't use quite the same "ripped from the headlines" plotting that Law & Order: SVU does, for example.

There is one case, profiled by The New Yorker, wherein a prominent New York City dentist, Gilberto Nunez, was indicted for the murder of his friend Thomas Kolman. As the case against him went, Nunez was allegedly posing as a CIA agent and having an affair with Kolman's wife, Linda. When Linda ended the affair, Nunez allegedly turned homicidal and drugged his friend with a substance only used by doctors and dentists. Now, Nunez was found not guilty by a jury for murder, but was found guilty of two forgery charges, according to CBS News. If this episode wasn't based on this case, this story certainly could inspire some type of film or show.

While it isn't out of the question that Brooklyn Nine-Nine got the inspiration for the episode from a similar and prominent case, it seems a little dark considering the general tenor of the comedy show. I can't imagine that the writers would want to cause intentional pain to real people by using a real-life murder for comedic material. In any case, there doesn't appear to be any evidence that the episode was written to reflect a real-life case. But who's to say if one of these cases provided the inspiration for it.

In my own opinion, this episode will be exciting because Brown gets to work alongside Braugher. If you remember Brown's Emmy acceptance speech when he won for Best Lead Actor in a Drama Series, Braugher was one of the first people he thanked. Brown was the first black man to win the award since Braugher won it nearly two decades previously. Now audiences finally get to see the two actors together, though in a comedic and not dramatic setting. But it's a big moment either way, and bound to be hilarious.