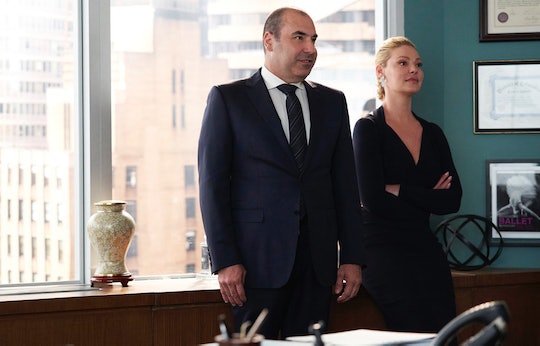 I Sure Hope 'Suits' Is Streamable

After a successful nine season run, Suits has come to an end, which is sad. But luckily, it is 2019, which means almost anything you could want to watch is available on some streaming site or another — so you don't need to say goodbye for good. So, is Suits on Netflix? If not, where can fans watch it? It's definitely marathoning material, especially if you are curious about how a certain American-born Duchess got her first glimpse of the spotlight.

Suits is actually not available on Netflix or on Hulu, but you can stream Suits Seasons 1-8 on Amazon Prime. There is no word on when Season 9 will become streamable, but I suggest fans let the series come to an end before worrying about that.

The end of any series is sad for everyone who loves it, but fans should know that Suits creator Aaron Korsh has seen the end coming for quite a few years now, as he told Deadline in early 2019. "Right after we finished shooting Season 6, I went to USA. At that time we only had the cast under contract until the end of Season 7. We had to figure out what to do, and we weren’t 100 percent sure what the cast wanted to do," he said. "We’d lost Gina and we came up with a plan to extend the cast for two more years beyond season 7 to seasons 8 and 9."

Then, something happened that no one could predict in their wildest dreams. "You can never know that one of your stars is going to marry the Prince of England, and Patrick decided not to return, so we had a choice whether to keep going after Season 7," Korsh continued to Deadline. Thanks in part to the addition of Katherine Heigl as Samantha Wheeler, the Suits team decided to continue with the original plan.

All of that uncertainty is now a part of British and American history (literally). As for the series finale, Heigl told Entertainment Tonight she gave very little thought to how Samantha's story would end, but she has very strong opinions about one particular couple. "That would just be the worst absolute way to end this show if you have [Donna and Harvey] break up and go, 'You know what, we gave it our best shot,'" she said. "Like, that would be awful. I would never forgive Suits or [creator] Aaron [Korsh]... That would be really weird."

She totally ships them like every other fan watching Suits and sipping wine on the couch. I don't get the sense that they're going to break up from the Suits series finale trailer. But for Heigl's sake I hope they get the happiest ending possible.

Heigl was a fan before joining the cast, so the end is especially bittersweet for her. "I'm going to miss being a part of it, but I'm gonna miss being able to watch it too," she said to ET. Working on the show changed the way she watched it and she admitted, "I don't know if that's good or bad. Like, I almost ruined it for myself." I hope that's not actually true. Being a part of creating my favorite show sounds like it would be a dream to me.

No matter how Suits ends, I'm glad Heigl and all fans can turn to Amazon Prime when they are missing the show. A spinoff series starring Gina Torres as Jessica Pearson — aptly titled Pearson — is currently airing on USA Network.